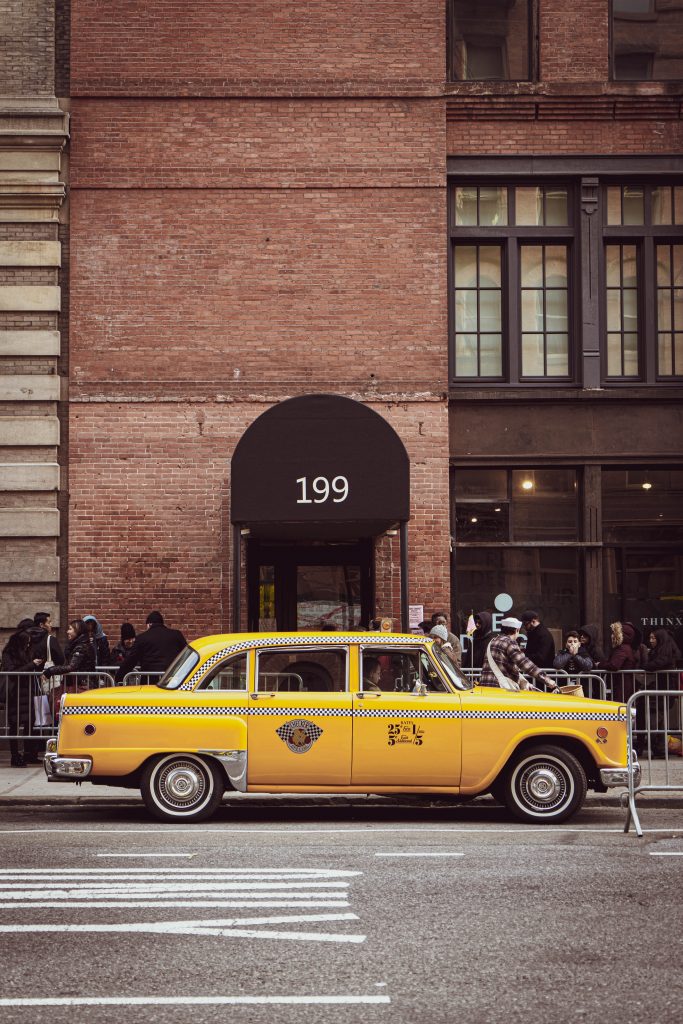 The cost of travel is going up dramatically right now, and nowhere is this more evident than the price of gas.  It could be worse for us here in Coastal Georgia, of course, we could be paying California prices or be in the UK, where people are paying the equivalent of almost $9 a gallon at the moment.  While this is impacting everyone, I really feel for those people who earn their living by driving other people – taxi and Uber drivers.  It got me thinking about taxis on both sides of the Atlantic.

Did you know that this year the Checker Motor Corporation, the company which made the big, square, clunky-looking iconic American yellow taxi-cab, is 100 years old?  Founded in 1922 in Kalamazoo, Michigan the company was formed through a merger of two existing automobile companies. From 1922 until 1959 Checker’s production vehicles were built almost exclusively for the commercial livery (taxi) business, although the company would build individual vehicles for personal use if requested. Checker cabs were highly valued for durability in heavy usage and special features which included wide rear doors, large rear seats and trunks, and jump seats for 2 extra passengers. The company had trouble competing with fleet discounts offered by the larger, high-volume manufacturers, and also did not have the economies of scale needed to obtain components at a cost effective price. By 1982, lacking the funds to develop a more modern vehicle, Checker Motors produced its final car. The company then invested heavily to pivot to third party manufacturing and become a significant supplier to GM and Chrysler.  I will never forget my first (not very comfortable) journey in one of these big, iconic, yellow monsters when the American man who later became my husband took me to New York for the first time in the 1990s.  We became engaged on that trip – although not in the back of a big yellow taxi I am pleased to report!

New York City first had a taxi service from 1897 called The Electric Carriage and Wagon Company, which had 12 electric hansom cabs available to hire.  A devastating fire ended that company in 1907, and in the same year the city’s first gasoline-powered taxis were imported from France.  These were painted bright canary yellow in order to be visible from a distance. Checker Cab dominated this business until the 1980s when the Ford Crown Vic took over as the most popular yellow taxi model (as well as the preferred choice for police cruisers).  Why?  Some say cost, others say nostalgia.  However, the most logical answer is that the Crown Vic was the last body-on-frame, rear-drive V8 American sedan in high-volume production, and its body-on-frame construction made it structurally more like a pick-up truck.  It can take very heavy damage to the body without bending the frame, which is important for the long and hard-wearing life of a yellow cab or a police cruiser.

Nowadays, NYC has more yellow cabs than regular cars. There are pre-defined rules and regulations for taxi drivers in big US cities, in which drivers have to attend classes, adhere to dress codes and decorum, and learn the geography.  Admittedly sometimes while riding in a NYC taxi it appears that all these lessons have been forgotten by the driver!

Back in England, the land of my birth, taxi cabs were available in London from 1903 but the big, iconic black cabs were introduced in 1947, and is now one of England’s internationally recognized symbols. All black cabs were initially designed to be tall enough to accommodate men wearing bowler hats which, in the years after World War Two, were essential outdoor dress for men in London.  The English licensed cab trade is the oldest regulated public transport system in the world.

All black cab drivers in London must pass ‘The Knowledge’ – a rigorous test that involves memorizing 320 routes, 25,000 streets and 20,000 landmarks within a six mile radius around Charing Cross in Westminster (which is always considered the central point for measuring distances from London).  While this seems a little antiquated in these days of Uber and GPS (what the British call SatNav), London cab drivers universally take pride in never, ever appearing lost or needing directions or assistance of any kind. Now that I think about it, this applies to most men I know, especially my husband.

There is a lot more about the taxi business on both sides of the Atlantic at  www.taximobility.com and www.londonblackcabs.net,

I will leave you with an amusing quote by British fiction writer, Alexandra Potter, who combines some thoughts on both taxis and men: “If only men were like New York taxi-cabs and had a light that they can switch on when they’re interested and off when they’re not available. Then you’d know exactly where you were and you wouldn’t have to worry about getting it wrong and being horribly embarrassed”.