THE EAGLES HAVE LANDED! 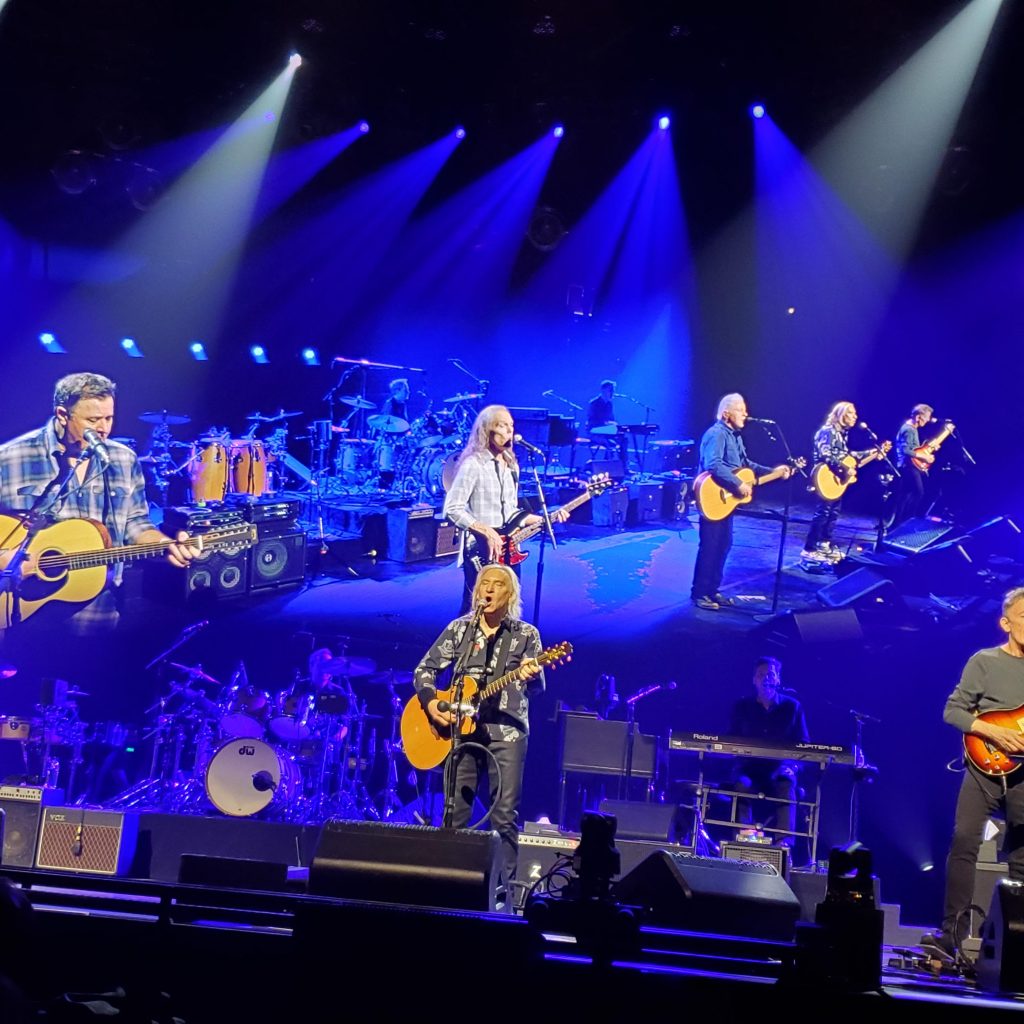 Here is a sentence I never expected to write.  Last weekend my husband and I saw The Eagles perform live in Savannah.   When we first visited Savannah in 2003 and then not long afterwards decided to make Coastal Georgia our home, it never occurred to us that this small, charming historic city would someday attract world class acts like The Eagles.  Of course, this was before Coastal Georgia’s dramatic growth, and long before the new Enmarket Arena arrived on the scene.  It was simply fantastic to join 9,500 other music fans who came to see The Eagles play.  This wonderful evening was proof to me that the exciting three dimensional world is returning in all its noisy glory! There seems to be a pent up demand to enjoy live concerts, theatre, movies, festivals, gala events and worship.

Seeing The Eagles has long been on my husband’s bucket list, so we splurged on 4th row seats for last Saturday night’s concert as a joint Christmas gift.  It was worth every penny and more.  As Don Henley said to the audience, their goal was to provide a three hour vacation from all the stress, hassle, and angst in the world, and boy did they deliver. The set opened with Hotel California, and they played every song in that album.  After the break, they played all their other hits and, as Joe Walsh said, “Wow, we’ve been everywhere, but tonight is the first time we’ve been to Savannah!”

The Eagles began in 1971, when Texan Don Henley and Glenn Frey from Michigan were independently hired to perform as part of Linda Ronstadt’s band. Frey and Henley became friends and formed The Eagles, becoming the driving artistic forces in the band.  After some changes in the early years, key members of The Eagles’ line-up consisted of Henley, Frey, Joe Walsh and Timothy B. Schmit.

I was a bit young for the Eagles’ heyday but older friends and relatives introduced me to their music in my teens in the 80s.  My husband, as a teenager in the US Midwest in the 1970s, loved their music with a passion but had never seen them perform live until last Saturday night as they kicked off their Hotel California North America tour here in Savannah.  In spite of the fact that Henley, Walsh and Schmit are all in their mid-70s they were in fine form.  Joe Walsh did comment to the audience that he “had more fun in his 20s in the 70s than in his 70s in the 20s” but his energy was impressive.  Of course, Glenn Frey died in 2016 but Schmit, a cancer survivor, still hit all the right notes and Don Henley’s voice did not seem to have aged at all.

The Eagles were era-defining as their particular brand of country rock was very distinct from the disco sounds, heavy metal and glam rock of many other bands of the 1970s.  Against a backdrop including the likes of David Bowie, Deep Purple and Kiss, they became known as that great band that just walked onto stage in their blue jeans and began to play.  After the height of fame following the release of their masterpiece Hotel California album they disbanded in 1980, as punk and new wave music was becoming more popular.  After the band’s breakup, Don Henley was asked when the Eagles would play together again, and he replied “when hell freezes over”.  So, with a bit of self-deprecating humor in 1994, The Eagles reunited and released their album Hell Freezes Over.  The band toured pretty consistently until Glenn Frey died in 2016, but The Eagles re-formed in 2017, with Glenn’s son Deacon Frey and Vince Gill sharing lead vocals for Frey’s songs.

The Eagles are one of the best-selling bands in history, having sold more than 200 million records, including 100 million in US alone. They were inducted into the Rock and Roll Hall of Fame in 1998 and were ranked number 75 on Rolling Stone‘s 2004 list of the “100 Greatest Artists of All Time”.  In the USA, the band had five number-one singles and six number-one albums, six Grammy Awards and five American Music Awards.   There is a lot more information at www.eagles.com

The Eagles were not quite as popular in the UK with only one top ten hit, Hotel California.  Joe Walsh is also not as well known in the land of my birth, but my husband was thrilled when as an unexpected bonus Walsh played some of his solo hits including scorching versions of ‘Funk #49’ and ‘Rocky Mountain Way’.  As for me, I was equally excited when Don Henley played one of his own solo hits ‘Boys of Summer’. I very distinctly remember motoring around London in my little Honda in 1984 listening to this fantastic song on the radio as it hit the UK charts.  And now, live in Savannah in 2022, it was even better.

I leave you this week with a poignant quote from the legendary Eagles front man Glenn Frey. “People don’t run out of dreams – people just run out of time.”