DO YOU THINK HE’S STILL SEXY? AN EVENING WITH ROD STEWART 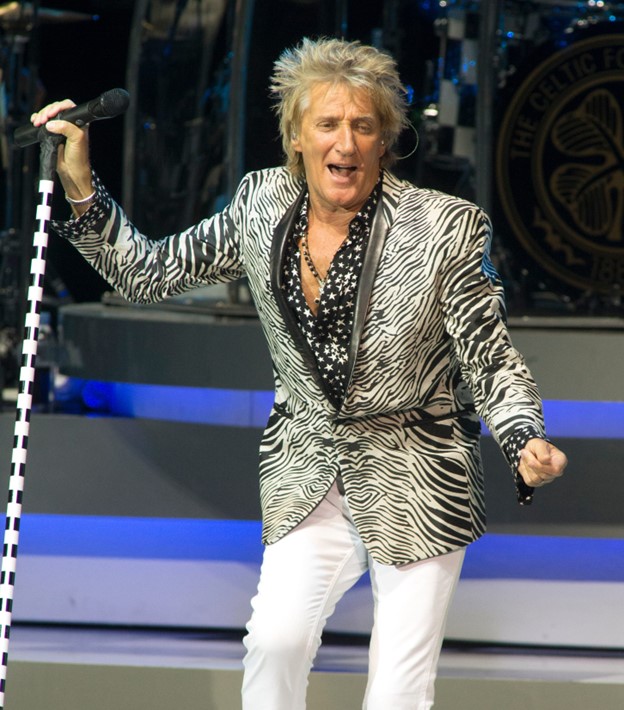 A few years ago, my husband and I decided that we should try to see some of the ageing rock stars of our youth while, putting it tactfully, we still could.  In other words, before it was too late for either them or us!  We made a good start by seeing The Rolling Stones in both Paris and Jacksonville, and my husband bought me a 2019 Christmas gift of tickets for a concert by Rod Stewart and opening act Cheap Trick for the summer of 2020.

Then of course the pandemic hit, creating a two-year delay!  In recent months we have enjoyed concerts by The Eagles and Foreigner in Savannah and, almost three years after buying the tickets, we travelled to Atlanta to see the ageing baby boomer Rod Stewart strutting his stuff!

Rod Stewart was born in January 1945 and although his father was Scottish and his elder four siblings were born in Scotland, by the time Rod arrived they had moved to England where his mother was born and raised.   Many people think he is Scottish due to his extensive wearing of plaid (which the British call tartan) and his love of the Scottish football (soccer) team Glasgow Celtic.  He also supports Manchester United, the English team.  He compares his love of this British national sport to his feelings for girlfriend of two years, the Swedish actress Britt Ekland, immortalized in  his 1977 mega-hit You’re In My Heart:  “You’re in my heart, you’re in my soul, you’ll be my breath should I grow old; You are my lover, you’re my best friend.  You’re in my soul.”  Now that is a real soccer fan!

It is fair to say that Rod Stewart was more faithful to football in his earlier years than to the women in his life.  Extensive press coverage of his infidelities over the decades report that Rod’s “type” appears to be tall, attractive, blonde, younger women. After breaking up with Ekland, he married actress and model Alana Hamilton, the former wife of actor George Hamilton, from 1979 to 1984. He had two children with her, Kimberley and Sean, and then after extensively and very publicly playing the field, he went on to marry New Zealand model Rachel Hunter in 1990, and had two more children, Renee and Liam.  Hunter was 21 and Rod was 45 at the time of their wedding and shockingly she left him in 1999, finally divorcing in 2006.  He soon met English model Penny Lancaster and they have two sons together, Aiden and Alastair.  The two married in 2007 and in spite of a 26-year-old age gap appear to still be happy together.  Rod Stewart has a total of eight kids including a daughter with girlfriend Susannah Boffey in 1963 before he became famous, and another daughter, Ruby in 1987, while Rod was dating American model Kelly Emberg.

In addition to his womanizing, Rod Stewart somehow found the time to build his music career during the 1960s and, after singing with the Jeff Beck Group, he released his first solo album in 1969.  He was one of the most popular British rock stars of the 1970s and has enjoyed decades of fame, fortune and is a Grammy Award winner. His distinctive raspy voice has been heard in rock and roll, folk music, ballads and frothy pop and disco music.  He has maintained his mischievous “working class lad” persona into his seventies, and demonstrated a lot of energy at the Alpharetta Amphitheatre, although he did rely fairly heavily on his outstanding backing singers and band members. In spite of his own advancing years he cheerfully performed his 1971 mega-hit “Maggie May”, the story of a young man trying to tear himself away from a consuming romance with a more mature woman.  Rod Stewart combined a solo career with singing in the band The Faces, but this broke up in 1975 when band member Ronnie Wood famously went on to join the Rolling Stones. By 1979, Rod’s sound was pure disco with “Do Ya Think I’m Sexy?”, a hit on both sides of the Atlantic.

Rod’s career, like his love life, has had its ups and downs, and his ability to reach the high notes was permanently impaired when he was diagnosed with thyroid cancer in 2000.  He had to learn to sing again and became active in raising funds for charities to find cures for all types of cancer, especially those affecting children. Just before the pandemic, Rod Stewart revealed that he had been diagnosed with prostate cancer in 2017 but had received the “all-clear”.

Rod Stewart was appointed Commander of the Order of the British Empire (CBE) in the 2007 new year list for services to music. Also, the late Queen Elizabeth II knighted him in her 2016 Birthday Honors List for his services to charity and music.  With mansions in California and Essex, England, Rod collects luxury cars and model railways and is estimated to be the 12th wealthiest person in the British music industry.  There is a lot more information at www.biography.com

I say goodbye this week with a quote from Hot Rod Stewart himself, one that is very appropriate in these challenging times: “Optimism is my best defense!”.