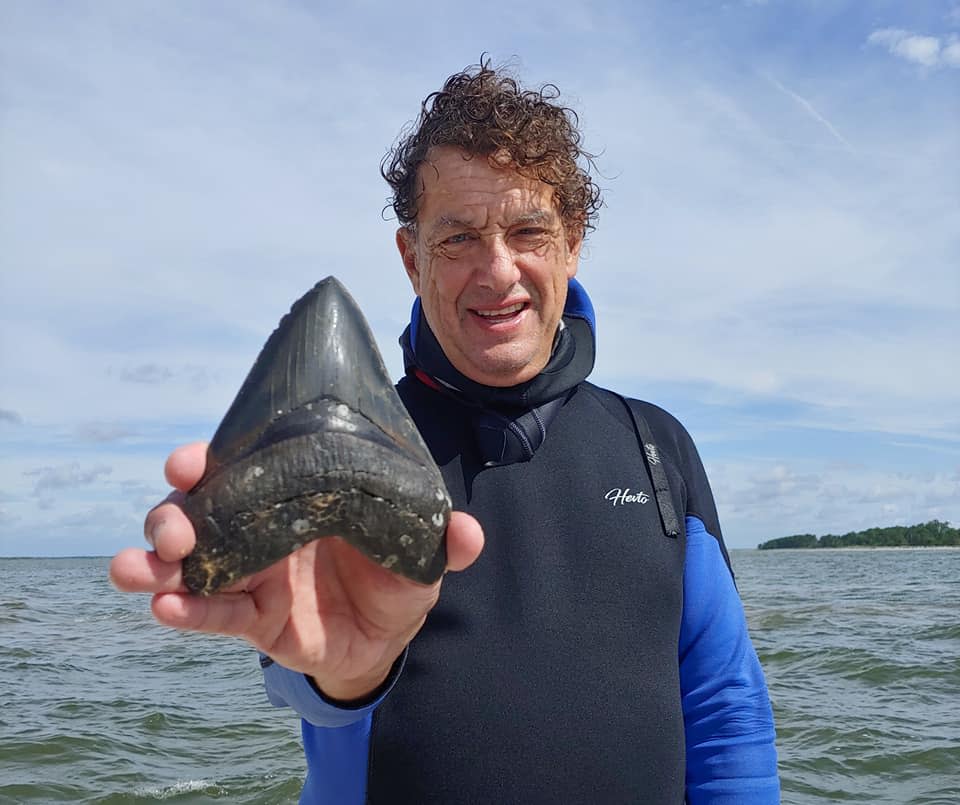 Savannah, GA – July 18, 2022 – While many people commute to work, few can say they literally dive into their jobs. Every week is “Shark Week” for Bill Eberlein, the founder of MegaTeeth Fossils, who dives day-in and day-out in the waters of Coastal Georgia in search of megalodon and mako shark teeth.

“These fossils have laid sedentary for centuries, only moved by the tides of our oceans,” Eberlein said. “These pieces of our world’s history remained untouched by the human hand, and I get the honor of getting to find these unique fossils and share that history with the world.”

The excitement generated each year by the Discovery Channel’s “Shark Week” – which takes place July 24-31 this year – prompts masses of people to learn more about the aquatic creatures and explore all things shark-related. Eberlein likes Shark Week because it makes him happy to know that others are interested in the elasmobranch fish he bases his livelihood on. It’s a passion he is eager to share with those who are curious.

Megaladons were enormous sea creatures, members of the now-extinct family of sharks, the megashark. The name megalodon translates in Greek to “big tooth,” which is no exaggeration. These ancient sharks measured up to 60 feet in length, which is the standard length of an entire bowling lane. A single tooth from this shark is generally three to seven inches long and weighs just under a pound. Those teeth may sound rather small, but the force of the teeth add up, given that megalodons had 276 teeth! The bite force of a megalodon adds up to about an impressive 40,000 pounds per square inch, which is greater than the bite force of a T-rex dinosaur. Today, only the fossils remain to carry on the daunting legacy of the megalodon, who roved the deepest parts of the oceans any time between 3 and 20 million years ago.

Eberlein has accumulated more than 25 years of diving experience, honing those skills and combining them with his background in accounting to successfully build MegaTeeth. With most of his time spent on leisure dives at shipwreck sites, Eberlein wasn’t introduced to fossil diving until the late 1990s, when he moved to Savannah. He went out in a charter boat off the coast of Hilton Head Island and truly knew he was hooked on fossil diving.

“I never imagined how prolific my collection would become and certainly never imagined I would have created a business for myself doing what I love every day,” Eberlein said.

As the fossil collection grew, he decided it was time to part ways with some of his precious pieces and in 2000 he started MegaTeeth fossils.  Eight years later he decided to “take the plunge” to dive and sell his fossils full-time, leaving his day job.  What was once a dream had come to fruition before his very eyes – a business built around passion.

Families from all over the map can enjoy a piece of “Shark Week” in their own home with a Megalodon tooth fossil. Eberlein’s Megalodon teeth and other fossils, exhibited on his on his website at https://megateeth.com/, are available for purchase. Each item is from Eberlein’s personal collection. Unless stated otherwise, each shark tooth purchase will include an acrylic display stand, certificate of authenticity and fossil identification information or an article about Eberlein’s hunt for shark teeth.