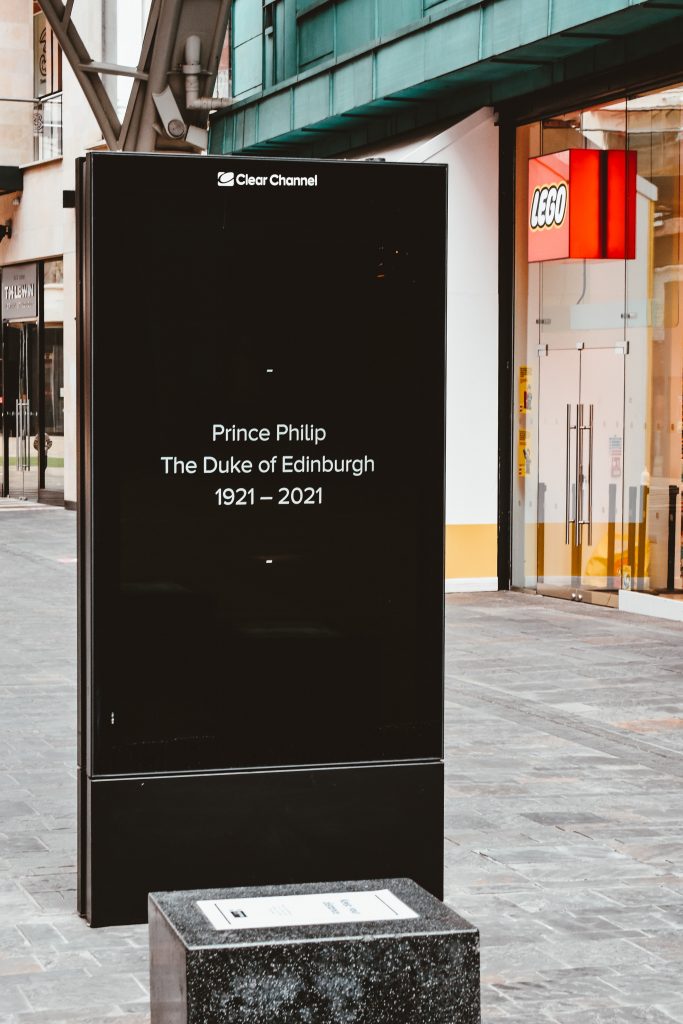 It has been a sad couple of weeks in the land of my birth as we mourn the passing of Prince Philip, Duke of Edinburgh on April 9, just two months before he would have celebrated his 100th birthday.  I love my life in beautiful Coastal Georgia and after twelve years living here and nine years since I became an American citizen, this is my home.  However, whenever there is a significant British ritual or royal event, I do feel the pang of homesickness – especially as I have not been able to return to the UK since 2019 due to the pandemic.

Last Saturday, my husband and I watched the funeral of the husband of Queen Elizabeth II at 10am EST (3pm in the UK).  Prince Philip had been married to the Queen for 73 years and was the longest-serving royal consort in British history.  At the age of 99, he had of course had a long and fulfilling life, and it was reported that he “died peacefully” at Windsor castle – their main home in recent years.  However, watching the elderly Queen (who turned 95 on April 21 – just days after burying her husband) mourn alone in the chapel at Windsor Castle – socially distanced and wearing a mask due to COVID-19 precautions – was heart breaking.  Who will call her “Cabbage” now?  This was Prince Philip’s nickname for his wife whose official title is ‘Her Majesty Elizabeth the Second – by the Grace of God, of the United Kingdom of Great Britain and Northern Ireland, and of Her Other Realms and Territories – the Queen, Head of the Commonwealth, and Defender of the Faith’.

The Duke of Edinburgh was born on the Island of Corfu as Prince Philip of Greece and Denmark, but in 1922 when he was eighteen months old, his family went into exile in London when the Greek royal family was overthrown in a military coup. When he married then-Princess Elizabeth in 1947, he gave up a promising naval career which could have seen him become “First Sea Lord”, the head of the British Navy. During World War II, the duke saw combat aboard a British destroyer and battleship.

The funeral had been planned in detail by Prince Philip himself over decades – although these had to be modified significantly due to the restrictions of the pandemic – many of these modifications made by the Duke of Edinburgh himself in recent months.  He retired from a busy schedule of public engagements in 2017, and earlier this year spent a month in hospital after undergoing heart surgery.  He died just a few weeks after he was discharged in March.

Watching the televised funeral from 4,000 miles away was poignant; in my opinion no nation does the national and royal ceremonial stuff better than Great Britain.  Under unusually clear blue skies on a lovely English spring day, close family attended the funeral with limited number of people – masked and distanced due to COVID-19 precautions – allowed in St. George’s Chapel.  The close relationship the Prince had with the military, especially the Royal Navy was reflected in the military parades and music performed before the funeral outside the chapel.  Prince Philip, who loved outdoor pursuits, the military, cars, and airplanes, showed that he was a true individual to the end.  In a break with tradition, he had personally designed a military green Land Rover for his coffin to be transported to the chapel. His coffin was draped in his personal standard (a military flag) and carried his sword and naval cap. On nine cushions on the altar were some of his military regalia, including Philip’s Royal Air Force wings and field marshal’s baton, as well as the Order of the Elephant, bestowed on him by Denmark, and the Order of the Redeemer, by Greece. These last ones symbolized his royal lineage as a prince of Denmark and Greece.  After Philip was interred, the Royal Marines’ buglers played “The Last Post” and “Action Stations,” a summons to battle stations that is rarely played at funerals but can be requested by a veteran of the Royal Navy.

Prince Philip supported the Queen for more than seven decades and his passing marks the beginning of the end of an era – a sad and sobering thought for many generations of British.  He set up The Duke of Edinburgh awards in 1956, the world’s leading youth achievement award foundation, operating in 141 countries.  He authored 14 books, was a keen birdwatcher, shooter, pilot, and competitive horse carriage driver after giving up polo around half a century ago.  He loved reading, oil painting and the great outdoors, and was quick-witted and straight talking if politically incorrect on occasions. He was much loved by his family and the nation.  At what we assume was his wish, there was no eulogy at the funeral, just the readings and music he selected – performed by a distanced choir of four people.

The Queen did over-rule him on one matter in a clear display of love and appreciation.  In a major break with royal protocol, and after his standing next to her but three steps back during her entire 69-year reign, for the first and only time her husband the Prince preceded her in the procession.  Her car followed his coffin transported on the modified Land Rover, along with close members of the royal family on foot.  There is more information at www.bbc.co.uk

It is appropriate that I say goodbye this week with this quote from Prince Philip himself from an occasion when he met an Australian man who introduced himself and said, “My wife is a doctor of philosophy and much more important than I am,” he replied: “Ah yes, we have that trouble in our family too!”