GRILLING OUT AS A NATIONAL PASTIME 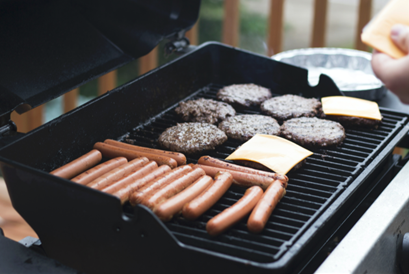 I hope you had a fabulous July 4th weekend.  Like many Americans, we spent the holiday with family, eating a variety of foods which could be cooked outside.  My husband loves to stand by our blazing charcoal grill, drink in hand, cooking the meat for our meal – although he does a pretty good sockeye salmon on cedar wood planks as well.  It must be something primeval about meat and fire that appeals to the male of our species.  Although he usually claims full credit for cooking the meal, it falls to me to prepare the sides, salads and table setting.

This all got me thinking about the passion Americans have for grilling out.  Obviously, it all started in a rudimentary form around 500,000 years ago after mankind figured out how to create fire to cook food during the Stone Age.  Many centuries passed before the human race got their first taste of ‘barbecue.’ It probably derived from the Arawak people of the Caribbean, who centuries ago used a wooden structure called ‘barbako’ where meat got smoked and cooked.

I need to confess to great confusion when I first arrived in America as in the UK the term “barbecue” means grilling out – that is cooking meat, fish or vegetables outdoors over open flames.  Of course, in this part of the USA, true barbecuing is cooking and smoking meat slowly over indirect heat, inside a barbecuing pit.  This type of barbecue began in 18th-century colonial America, specifically in the settlements along the Southeastern seaboard where pigs were abundant.   Whole hogs spent up to 14 hours over coals resulting in delicious pulled pork.

Turning back to the backyard rituals enjoyed over the Independence Day weekend; did you know that until the mid- 20th century grilling food outside mainly happened at campsites and picnics?  Outdoor cooking anywhere else was often seen as a sign of poverty.  However, after the Second World War when people began to flock to the suburbs, backyard grilling became extremely popular.

Around this time in Chicago, George Stephens, who owned a metal working factory, had grown frustrated with the flat, open brazier-style grills common at the time.  He began experimenting and invented a round grill that held in heat.  Stephen made this new grill by severing a metal buoy in half and fashioning a dome-shaped base with a rounded cover, which he began selling in 1955.  He called it “George’s Barbeque Kettle” and had a big winner on his hands.  Later, he bought out his manufacturing partners the Weber Brothers, and renamed the company the Weber-Stephens Products Company, and re-named his creation the Weber Grill.  The business was family-owned for 117 years until 2010, and became a public company just last year, worth $2 billion today.

America’s most famous 4th of July food tradition is grilling hot dogs and hamburgers. The National Hot Dog and Sausage Council has declared July as National Hot Dog Month.   We know that hot dogs evolved from the German frankfurter sausage which was brought to America by immigrants.  However, the reason for hot dogs rise in popularity in the 20th century is less clear.  Some say it became associated with American culture and baseball parks in 1893 thanks to St. Louis bar owner and German immigrant, Chris Von der Ahe, who owned the St. Louis Browns major league baseball team.  Others say that in 1901 when the New York Polo grounds ran out of wax paper for sausages, they started using spare French rolls.  Others place the beginning of hot dogs to the Coney Island Amusement Park in the late 1800s, and some trace hot dogs back to the 1904 World’s Fair in St Louis.  No matter their history, I have to confess that despite my American citizenship, I just don’t love hot dogs!

Now hamburgers are a different story – I love them and was delighted to find out that the earliest mention of the hamburger is in a 1763 English cookbook by Hannah Glasse, The Art of Cookery, Made Plain and Easy.  In 1802 the Oxford English Dictionary includes a ‘Hamburg steak’ – a slab of salted, minced beef that is slightly smoked and mixed with onions and breadcrumbs. Salted and smoked food were ideal for long sea voyages and in the 18th century the ‘Hamburg steak’ made its way across the Atlantic. Ships of the Hamburg-America line brought thousands of immigrants to the New World and soon Hamburg-style beef patties were being served from street stands.  They were also at the 1904 World’s Fair, and in 1916 Walter Anderson, a fry cook from Kansas, invented a bun specially for hamburgers. Five years later he co-founded White Castle and the world’s first burger chain was born.  For more information see www.history.com.

I say goodbye this week with a quote from Microsoft founder Bill Gates.  “Flipping burgers is not beneath your dignity. Your Grandparents had a different word for burger flipping – they called it opportunity.”