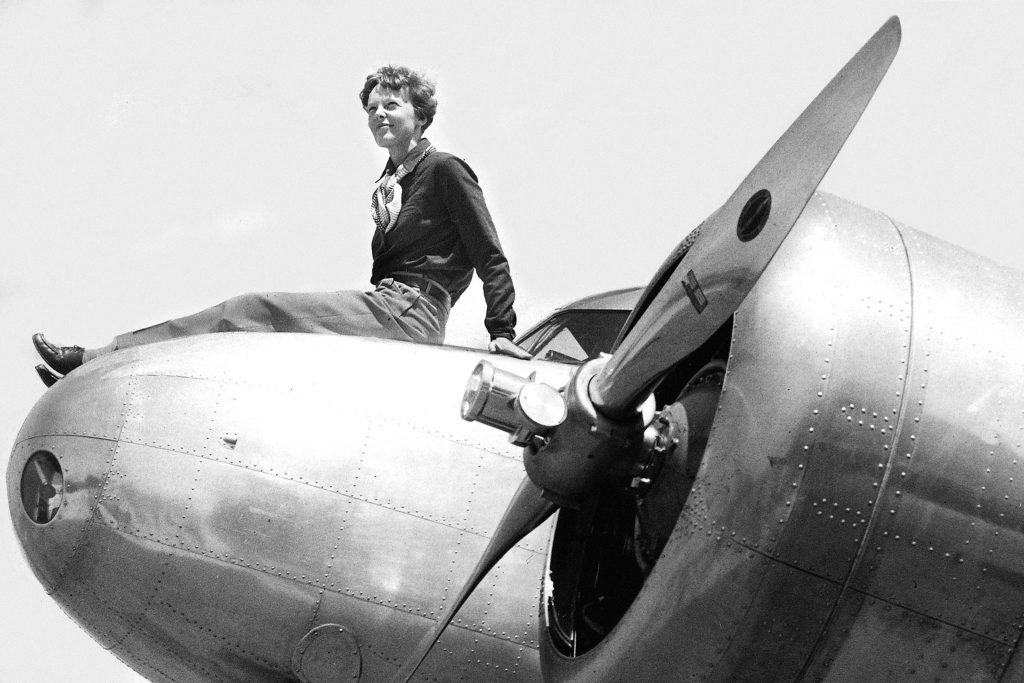 I think of myself as a “can-do” person, and a woman who likes to get things done. Early in my career in late 1980s and early 1990s London, I modestly thought of myself as a young woman pushing the career envelope by taking on jobs and responsibilities which some thought were too senior for me, or even “too male”.  I worked in healthcare public relations, an industry in which most of the workforce were women but top management was dominated by men.

However, my own tiny contribution to the progress of women in Western society is dwarfed by many others, and right at the top of that list is the great American aviator Amelia Earhart, the first female pilot to fly solo across the Atlantic Ocean.  Sunday is her 125th birthday.

Amelia Mary Earhart was born in Atchinson, Kansas.  Her father was a railroad lawyer and her mother came from a well-to-do family. As a child in Kansas, Amelia was very independent and adventurous. Her mother encouraged this behavior, and Amelia (known well into adulthood as “Meeley”) was dutifully followed around by her younger sister Grace (known as “Pidge”). They shot rats with rifles, climbed trees and jumped off rooftops, collected insects and reptiles, and generally had a boisterous childhood full of rowdiness and “tomboy” activities.

Her father had drifted into alcoholism and had trouble finding and holding a job.  After moving around, the girls eventually finished high school in Chicago.  Amelia graduated in 1916, always dreaming about finding independence through a career.  According to the family’s website 100 years later, she kept a scrapbook of newspaper clippings about successful women in predominantly male-oriented fields, including film production, law, advertising, management, and mechanical engineering.

At the height of World War I, Earhart trained as a nurse’s aide with the Red Cross. After attending a few air shows in 1920, she paid for a short passenger flight from Emory Roger Field on Wiltshire Boulevard in Los Angeles.  The fare was $10 for a 10-minute flight with Frank Hawks, a pilot who became a renowned airplane racer. “By the time I had got two or three hundred feet off the ground, I knew I had to fly”.  Over the next few years, she saved every penny she made as a truck driver, secretary and photographer to fund flying lessons, and on May 16, 1923, Earhart became the 16th woman in the United States to be issued a pilot’s license.  Aviation history was changed forever.

Earhart continued to fly on weekends but flying still did not provide a steady source of income. In 1928 she was living in Boston where, among other jobs, she was a salesperson for the Kinner Aircraft Company.  She got a call from Amy Guest, a wealthy American lady living in England.  Charles Lindbergh had just completed the first solo flight across the Atlantic, and Guest wanted to fund a woman to do something similar.  Was Earhart interested?

Amelia Earhart’s first Atlantic crossing was as part of a three-person crew, but it launched her celebrity status.  Then on May 20, 1932, the 34-year-old Earhart set off from Newfoundland.  She intended to fly solo to Paris in her single engine Lockheed Vega to emulate Charles Lindbergh’s solo flight five years earlier, but after a grueling flight of almost 15 hours with icy conditions, strong winds and mechanical problems, she instead landed in a field near Londonderry, Northern Ireland. When a local farmer saw the landing and asked, “Have you flown far?”, she reportedly shocked him with her answer: “From America”.

Between 1930 and 1935, Earhart set seven women’s speed and distance aviation records in a variety of aircraft, and her fame grew. She advocated women’s rights, raced in airshows, was a spokesperson for the aviation industry, and was constantly in the newspapers, especially her meetings with Presidents.  In 1931, she married publisher George Putnam, but pointedly refused to take his last name.  When referred to as “Mrs. Putnam”, she laughed and called her husband “Mr. Earhart”.

In March 1937, Earhart attempted to become the first woman to fly around the world.  The initial attempt ended in a crash landing due to mechanical problems, and on June 1st that year, she and navigator Fred Noonan set off from Miami to try again.  After completing 22,000 of the 29,000-mile trip, they took off from Papua New Guinea on July 2, 1937, and their last radio transmissions indicated they were running low on fuel but could not find their intended destination of Howland Island in the Pacific Ocean. The most expensive and exhaustive naval search up to that point in history produced nothing but a string of theories about their disappearance, some of which are still hotly debated today, 85 years later. See www.history.com  for more.

I say goodbye this week with a simple quote from the great lady herself: “The most effective way to do it, is to do it”.  I could not agree more!