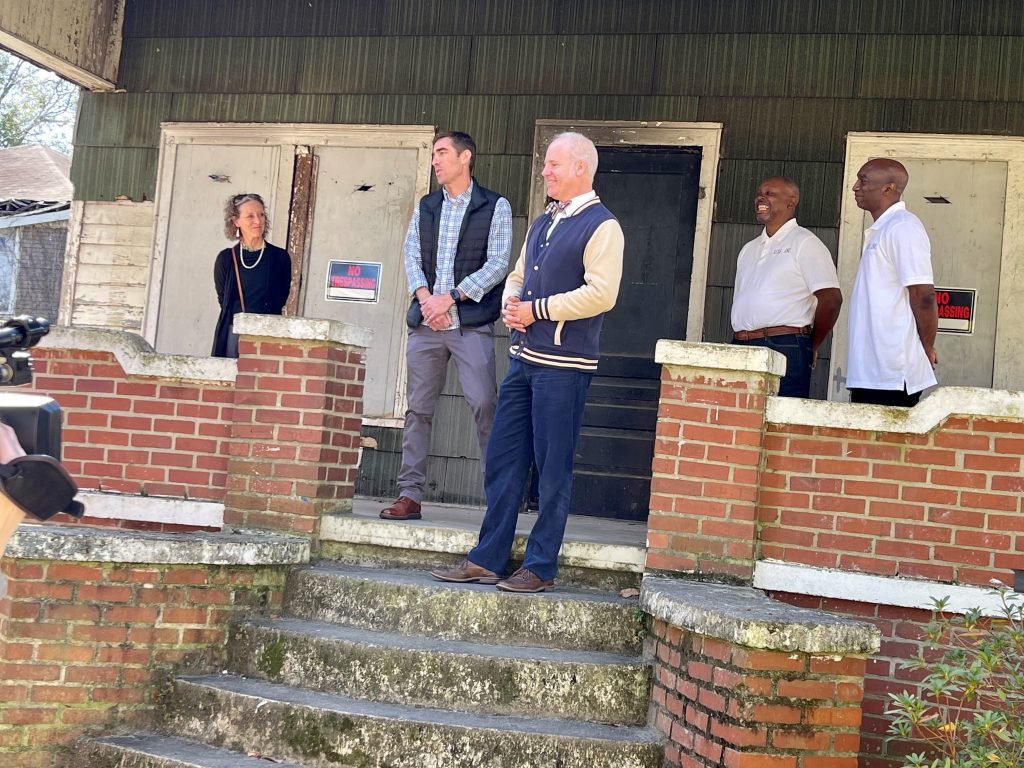 The nonprofit preservation organization is addressing the city’s lack of affordable housing in conjunction with a few partner agencies, including the Savannah Dream Maker Home Buyer Assistance Program, the Savannah Landbank Authority, and some private buyers/investors.

The launch was held at 607 W. 39th St., a small historic home that HSF is rehabilitating to be sold as affordable housing. The house is in Cuyler-Brownville, which is a neighborhood on the west side of Savannah that is part of a locally protected historic district. HSF is working to save and protect vulnerable vacant buildings in the neighborhood, which has lost about 100 historic homes in the last 20 or so years, according to Ryan Arvay, HSF’s Director of Preservation & Historic Properties. This problem is worsening due to a variety of factors.

“It’s mostly because of a high vacancy rate – nearly 30 percent. When absentee property owners don’t maintain their properties, then code compliance officers cite them and issue violations due to valid housing and safety concerns. If a property owner does not rectify or fix the issue then, after a while, code compliance often takes the property to recorder’s court and can appeal to a judge for a court-ordered demolition, which supersedes any local protection. And that’s when historic homes are torn down,” Arvay said. “Other times, a homeowner passes away and leaves no will, or no one to take ownership. Or perhaps, a homeowner does will the home to a relative, but that relative doesn’t have the resources to fix it up.”

Arvay said HSF’s team, led by CEO & President Sue Adler, is committed to avoiding gentrification, which is when improvements to a neighborhood change its character and draw in new businesses and wealthier residents that displace the current inhabitants due to a higher cost of living.

To combat that, HSF is partnering with the Dream Maker Home Buyer Assistance Program on the West 39th Street home. The program, offered through the City of Savannah’s Housing & Neighborhood Services Department, helps with down payments for qualified low-income, first-time buyers.

The home was donated to HSF, which is executing the rehabilitation of the property – something they don’t typically do. Instead, when HSF acquires a historic home, they usually stabilize it and sell it to a preservation-minded buyer. As part of the new Affordable House Initiative, however, HSF will be working with LCLS Inc., a minority-owned construction company operated by contractor Freddie Lucas.

If the refurbishment and sale of this first home goes well, HSF will continue the initiative with subsequent homes in the Cuyler-Brownville neighborhood with the goal of providing more affordable housing options for Savannah’s residents.

“There is a huge need for affordable housing right now in Savannah, and preservation is actually a good means for providing affordable housing. We have all this unused housing stock just sitting there. So, instead of building more units, we thought, ‘Let’s capitalize on the initial investment of materials, energy, labor and fix these up. Then, we’ll restrict their use to keep them affordable,’” Arvay said. “We won’t sell them any other way.”

Historic Savannah Foundation, a leading nonprofit preservation and cultural institution, saves buildings, places, and stories that define Savannah’s past, present, and future. Following its formation in 1955, the organization started a Revolving Fund to save endangered historic properties, now totaling nearly 410 buildings throughout several of Savannah’s historic districts. HSF continues to build capacity within its operations, secure new financial resources, improve its image and visibility, and increase public policy efforts to protect Savannah’s historic districts. For more information, visit www.myhsf.org or call 912-233-7787, and follow HSF on their social media, including Facebook, Twitter, and Instagram.