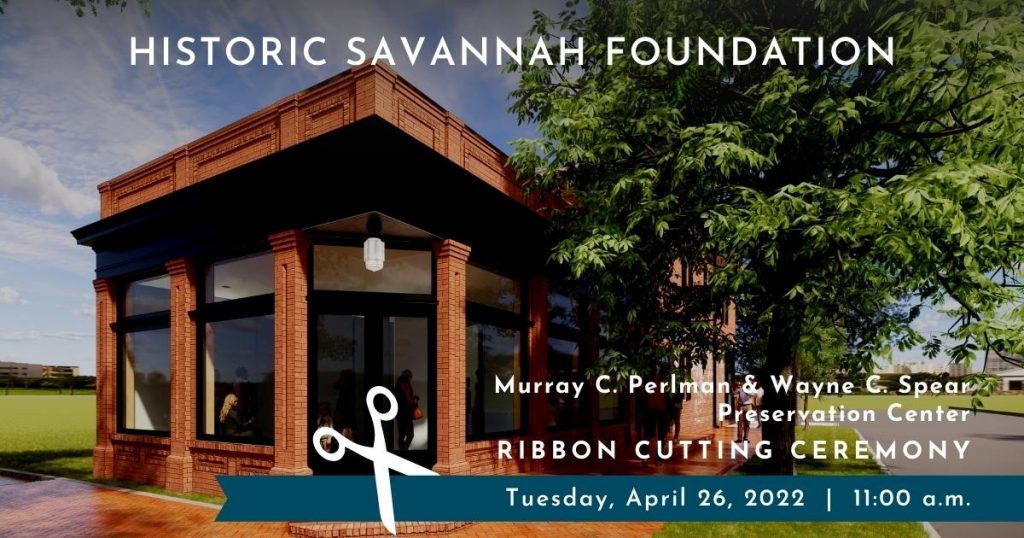 SAVANNAH, GA – APRIL 13, 2022 – Historic Savannah Foundation will host a ribbon-cutting and grand-opening ceremony to commemorate the completion of the Murray C. Perlman & Wayne C. Spear Preservation Center as well as the restoration of the Kennedy Pharmacy. The community is invited to join HSF for the celebratory event at 11 a.m. Tuesday, April 26 at the pharmacy, located at 323 E. Broughton St. in Savannah.

HSF President and CEO Sue Adler encourages the public to attend, as HSF is eager to celebrate the momentous occasion – one that has been a couple years in the making. Contractors broke ground on the projects in December 2020. The center and the pharmacy restoration were designed by Felder & Associates, LLC architectural firm, led by firm founder and Managing Principal Architect Brian Felder, who is also a previous chairman of HSF’s Board of Trustees. The work was completed by Brooks Construction, led by Josh Brooks, the board’s immediate past president.

“We are thrilled to finally open the doors to the Preservation Center – a beautiful new community resource – and welcome our members, supporters, friends and visitors,” Adler said. “With the help of HSF’s project partners, Felder & Associates, LLC, Brooks Construction and DMDG2, and the support of our donors, members and board of directors, this multi-faceted project has come to life beautifully.”

The new Preservation Center contains an educational space for visitors that may be used for exhibits or a meeting area, and the Kennedy Pharmacy renovation includes the relocated Davenport House Museum (DHM) gift shop, tour ticketing area, restrooms, and  offices for DHM staff. The renovation is historically accurate to Kennedy Pharmacy’s original 1890 layout and will be maintained by HSF.

Felder elaborated on the research and collaboration that went into the project.
“For this design, we looked at existing small retail buildings in the Historic District for inspiration. Because of the position of the lot and the understanding that this space needed to integrate seamlessly with the surrounding historic building, our team focused more on structures facing secondary streets or lanes, and we are pleased with the result. Expanses of glass windows allow views of Habersham Street, Columbia Square, and the Davenport House. This meeting space will be highly functional as well as visually striking. We worked closely with Doug Mund of DMDG2, a museum and exhibit designer, who was instrumental in the design of the ground floor gift shop, as well as programming for the new multi-purpose space.  Our team is proud to preserve the unique history of Savannah and design a building that both enhances the block and fits in aesthetically with the structures surrounding it.”

Josh Brooks agreed with Felder’s sentiment, stating that his team enjoyed their role in the project as well.

“Brooks Construction Group was honored to be a part of such a landmark project for HSF and our city.  The incredible staff at HSF was a joy to work with, and we are proud to support their worthy mission in keeping our city authentic and beautiful. We greatly appreciate the opportunity to be a part of the restoration of the Kennedy Pharmacy and new Preservation Center,” Brooks said.

Gregori Anderson, head of HSF’s building committee and the board parliamentarian, looks forward to seeing this phase of the project completed, and acknowledged everyone who has made it possible.

“I am excited about the completion of the first phase of the Preservation Center/Kennedy Pharmacy project. For the tremendous effort of the donors, staff, architect, contractor, and volunteers, I am also very thankful,” Anderson said.

Epilepsy Safe Mode
Dampens color and removes blinks
This mode enables people with epilepsy to use the website safely by eliminating the risk of seizures that result from flashing or blinking animations and risky color combinations.
Visually Impaired Mode
Improves website's visuals
This mode adjusts the website for the convenience of users with visual impairments such as Degrading Eyesight, Tunnel Vision, Cataract, Glaucoma, and others.
Cognitive Disability Mode
Helps to focus on specific content
This mode provides different assistive options to help users with cognitive impairments such as Dyslexia, Autism, CVA, and others, to focus on the essential elements of the website more easily.
ADHD Friendly Mode
Reduces distractions and improve focus
This mode helps users with ADHD and Neurodevelopmental disorders to read, browse, and focus on the main website elements more easily while significantly reducing distractions.
Blindness Mode
Allows using the site with your screen-reader
This mode configures the website to be compatible with screen-readers such as JAWS, NVDA, VoiceOver, and TalkBack. A screen-reader is software for blind users that is installed on a computer and smartphone, and websites must be compatible with it.

We firmly believe that the internet should be available and accessible to anyone, and are committed to providing a website that is accessible to the widest possible audience, regardless of circumstance and ability.

To fulfill this, we aim to adhere as strictly as possible to the World Wide Web Consortium’s (W3C) Web Content Accessibility Guidelines 2.1 (WCAG 2.1) at the AA level. These guidelines explain how to make web content accessible to people with a wide array of disabilities. Complying with those guidelines helps us ensure that the website is accessible to all people: blind people, people with motor impairments, visual impairment, cognitive disabilities, and more.

This website utilizes various technologies that are meant to make it as accessible as possible at all times. We utilize an accessibility interface that allows persons with specific disabilities to adjust the website’s UI (user interface) and design it to their personal needs.

Additionally, the website utilizes an AI-based application that runs in the background and optimizes its accessibility level constantly. This application remediates the website’s HTML, adapts Its functionality and behavior for screen-readers used by the blind users, and for keyboard functions used by individuals with motor impairments.

If you’ve found a malfunction or have ideas for improvement, we’ll be happy to hear from you. You can reach out to the website’s operators by using the following email

Our website implements the ARIA attributes (Accessible Rich Internet Applications) technique, alongside various different behavioral changes, to ensure blind users visiting with screen-readers are able to read, comprehend, and enjoy the website’s functions. As soon as a user with a screen-reader enters your site, they immediately receive a prompt to enter the Screen-Reader Profile so they can browse and operate your site effectively. Here’s how our website covers some of the most important screen-reader requirements, alongside console screenshots of code examples:

We aim to support the widest array of browsers and assistive technologies as possible, so our users can choose the best fitting tools for them, with as few limitations as possible. Therefore, we have worked very hard to be able to support all major systems that comprise over 95% of the user market share including Google Chrome, Mozilla Firefox, Apple Safari, Opera and Microsoft Edge, JAWS and NVDA (screen readers), both for Windows and for MAC users.

Despite our very best efforts to allow anybody to adjust the website to their needs, there may still be pages or sections that are not fully accessible, are in the process of becoming accessible, or are lacking an adequate technological solution to make them accessible. Still, we are continually improving our accessibility, adding, updating and improving its options and features, and developing and adopting new technologies. All this is meant to reach the optimal level of accessibility, following technological advancements. For any assistance, please reach out to