I CAN SEE CLEARLY NOW – THE HISTORY OF EYEGLASSES 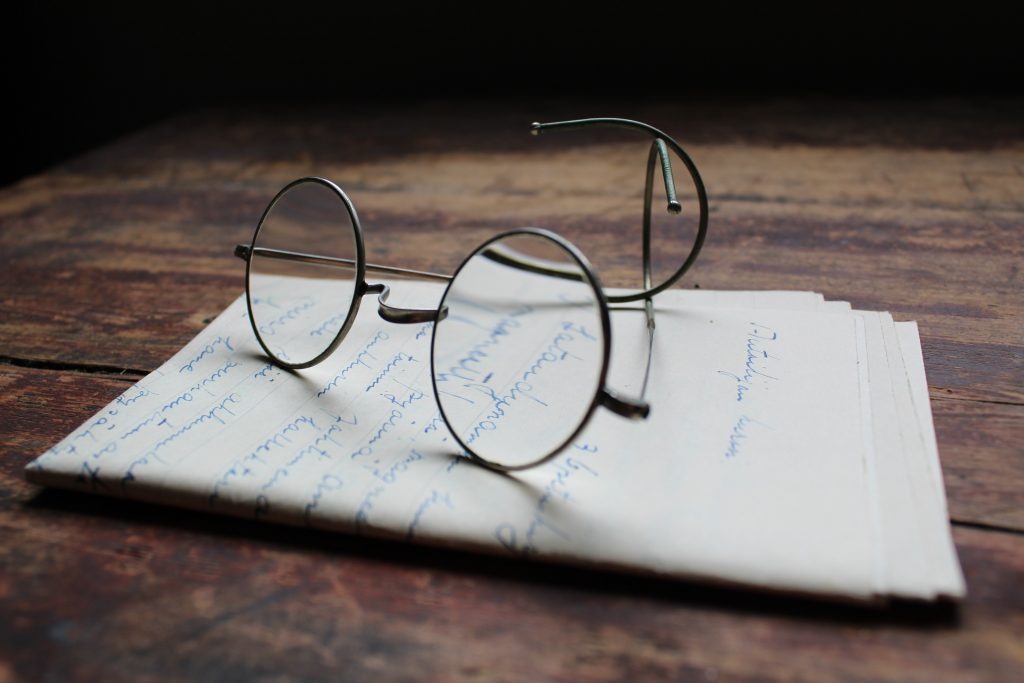 I recently went for a routine check-up with my ophthalmologist and noticed a young girl looking at frames with her mother which reminded me of my first eyesight test at 8 years old.  I didn’t realize that I was short sighted until I got my first pair of glasses and saw how bright, clear and colorful the world could be!  I then moved to contact lenses in the 1980s and Lasik eye surgery 20 years ago.  Yet another benefit of being around during this time in medical history.

The concept of eyeglasses as we know them today is fairly recent, but the idea of improving natural eyesight goes back to Roman times. The Roman philosopher Seneca, who was a tutor and advisor to Emperor Nero, boasted that he read “all the books in Rome” through a large glass bowl filled with water which magnified the print. The Romans are also credited with discovering that they could use glass to enhance their ability to see small text.  These small flat-bottom pieces of glass with spherical tops were laid on top of text and called “reading stones”.  These were especially useful for monks who used them to continue to read, write and illuminate manuscripts as they aged, and their eyesight deteriorated.   Italian monks were early adopters of the first wearable glasses which appeared in 13th century Italy when basic glass blown lenses were set in wooden, leather or animal horn frames which were handheld in front of the face or perched on the nose.

Glass blowers then started making lenses of different thickness to correct varying levels of impaired vision.  These grew in popularity and spread through Europe during the Renaissance of the 15th and 16th centuries with many paintings of this era showing the educated and prosperous wearing these strange looking contraptions on the face.

In 1740, London-based scientist, inventor and businessman Benjamin Martin published a book title “A New and Compendious System of Optics”.  He also developed “over the ear” glasses frames so eyeglasses could be used without the use of hands.  This led to the development of more accurate lens development and thinner lenses supported by stronger frames.  Another Benjamin – Founding Father, Benjamin Franklin, great inventor, writer, printer, politician and more – is credited with inventing bifocals in 1784.  At the age of 78, he was struggling with his eyesight and as is common with advancing years, both his near and far-sight were affected.  He apparently cut lenses in half and put them together in one frame.   Some people have challenged this and think that rather than inventing them, he might have merely been an early adopter of a split-bifocal lens developed about the same time in England where he travelled and spent many years during his long life.  But like many things in history, in time the details become blurred (bad pun intended).

Until the industrial revolution of the 19th century, eyeglasses were only available to the relatively affluent as they were individually handcrafted.  Then came mass production and an increase in lens technology and accuracy of prescriptions, so eyeglasses became available to most of the population.  During the early 1900s a trend began where glasses became a fashion statement as frames of different shapes, materials and colors were available.  About that same time, the invention of strong plastics entered the industry, which could be molded into different shapes and sizes compared to the old-fashioned wood, metal, or horn frames.  It was not until the 1980s that plastic lenses were introduced which are lighter and thinner than glass and less likely to break.  This was followed by technology allowing for protective coatings that reduce glare and UV light.

What about sunglasses?  There is evidence that prehistoric Inuits wore flattened walrus ivory in front of their faces to protect them from the sun’s rays. In ancient Rome, the emperor Nero held a polished emerald in front of his eyes to reduce the sun’s glare while he watched gladiators fighting.  By the 12th century the Chinese were using slabs of smoked quartz held against the user’s face in a rough frame to block out the sun’s light. Then for several centuries, lenses were darkened by various means to further improve the wearer’s vision in the sun.

The modern era of mass-produced sunglasses really began in 1929 when Austrian immigrant and naturalized American Sam Foster, who had developed a business based on recently developed plastics technology with salesman William Grant, launched inexpensive sunglasses to the public in an Atlantic City Woolworths, reportedly for just 10 cents per pair.  From this moment, a huge industry was born.

Foster Grant sunglasses became very popular when Hollywood stars began using them to shield their eyes from the bright studio lights, as well as trying to disguise themselves from paparazzi. My American born and raised husband tells me that he remembers the famous advertising campaign in the 1960s – “Who’s behind those Foster Grants?”

Back in the 1930s, the military also got involved to develop effective eyeglasses to protect pilots from high altitude glare, and polaroid filters were introduced allowing glasses to protect against harmful UV rays.  In 1936 the Bausch & Lomb Company launched Ray-Ban anti-glare aviator glasses using this technology, which General Douglas MacArthur made iconic during the second world war.  The marriage of eye protection and style and fashion continues to the present day.  For more information visit  www.history.com

I will leave you with a thought provoking quote from 20th century American educator Helen Keller who overcame the adversity of being both blind and deaf, “The only thing worse than being blind is having sight but no vision”.