I’VE BEEN WAITING SO LONG…. FOR FOREIGNER! 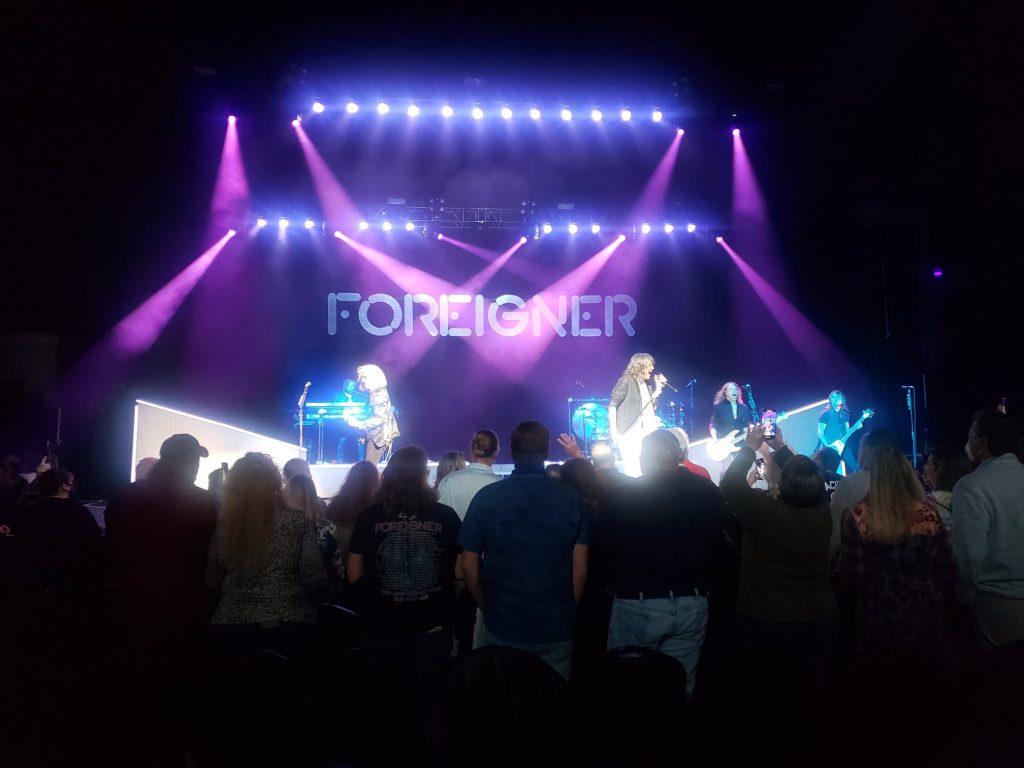 Slowly we seem to be getting back to a type of normality – even though it involves booster vaccines, masks, and lots of public debate about both.  However, more excitingly, I have rock-and-roll news.  A lot of big-name bands are currently avoiding international tours and huge venues for understandable reasons, so that perhaps makes cities like Savannah more attractive to concert promoters right now than before the pandemic.  So last week, my husband and I decided to dance our way to the Johnny Mercer Civic Center to see Foreigner on the Savannah leg of their US tour.

It was thrilling to be back at a live concert again! We were rocking out to Cold As Ice and Juke Box Hero and mellowing out to Waiting For A Girl Like You and I Want To Know What Love is. I adore 1980s music, especially classic rock, and I admit to being fairly obsessed by this narrow genre of music.

Uncharacteristically, I will dance and sing along, knowing almost all the lyrics to the top ten hits of this era. I love this small slice of musical history, and my family know not to challenge me on facts and trivia about 1980s classic rock bands and hits. This is provided of course that the band was big in the UK which some huge American bands weren’t.

Foreigner definitely rings my rock-and-roll bell as they dominated the UK and US charts from the late seventies to the mid-eighties.  Foreigner is, in my humble opinion, a great example of the best of British and American talent combined. They were formed in New York City and London in 1976 by six veteran musicians from Spooky Tooth, King Crimson, and Flash, among others.  English musicians Mick Jones, Dennis Elliot and Ian McDonald joined up with American vocalist Lou Gramm and musicians Al Greenwood and Ed Gagliardi.  They originally called themselves “Trigger” but on discovering that this name was already taken, Jones came up with the name of “Foreigner” because no matter whether they were in the US or the UK, three of them would always be foreigners.

Their first album ‘Foreigner’ was released in 1977, followed by ‘Double Vision’ (1978), ‘Head Games’ (1979), and ‘Foreigner 4’ (1981).  All four of these achieved “5X Platinum” status, and the band went on to sell over 80 million records worldwide, with nine top ten hits and sixteen top thirty hits in the USA – the same as Fleetwood Mac and more than Journey.  ‘Foreigner 4’ was their most successful and is widely regarded as one of rock’s all-time greatest.

Despite the thirty or so songs that almost everyone of my generation knows by heart on both sides of the Atlantic, “I Want To Know What Love Is” was Foreigner’s only number one smash hit on the Billboard charts in January 1985. From the band’s fifth album “Agent Provocateur”, the song is a classic melody with wonderful guitar and keyboard playing, and also on the soundtrack of the movie “Mr. Wrong”.

After a string of massive hits, the band started to drift apart in 1985, a few months after the release of ‘Agent Provocateur’.  Mick Jones reformed the band in 1990, and they released a new album.  Soon after, Lou Gramm came back and rejoined the group on lead vocals. Despite some ups and downs and some health issues, the band stayed together until 2002 when it broke up once again.

In 2005, the tenacious Mick Jones put it back together yet again and is currently, at the age of 76, the only original member.  This occasionally leads to accusations by some that Foreigner today is more like a tribute band than the “real thing”.  However, I can personally report that Kelly Hansen who has been lead vocalist since 2005, was in fine voice last week. Anyone at the Civic Center would have been hard pressed to tell any difference to the original line up.

There is a lot more information at the band’s official website www.foreigneronline.com

I say goodbye this week with a quote from Mick Jones himself, who in my book is THE Juke Box Hero –

“My initial musical vision for Foreigner was to combine Blues and R&B with British Rock and make it sound soulful and authentic. I’d grown up in England and had the English influence but I was also inspired by many elements of American music, from Mississippi Blues to Country and Western. Foreigner was the vehicle to get that musical blend across.”