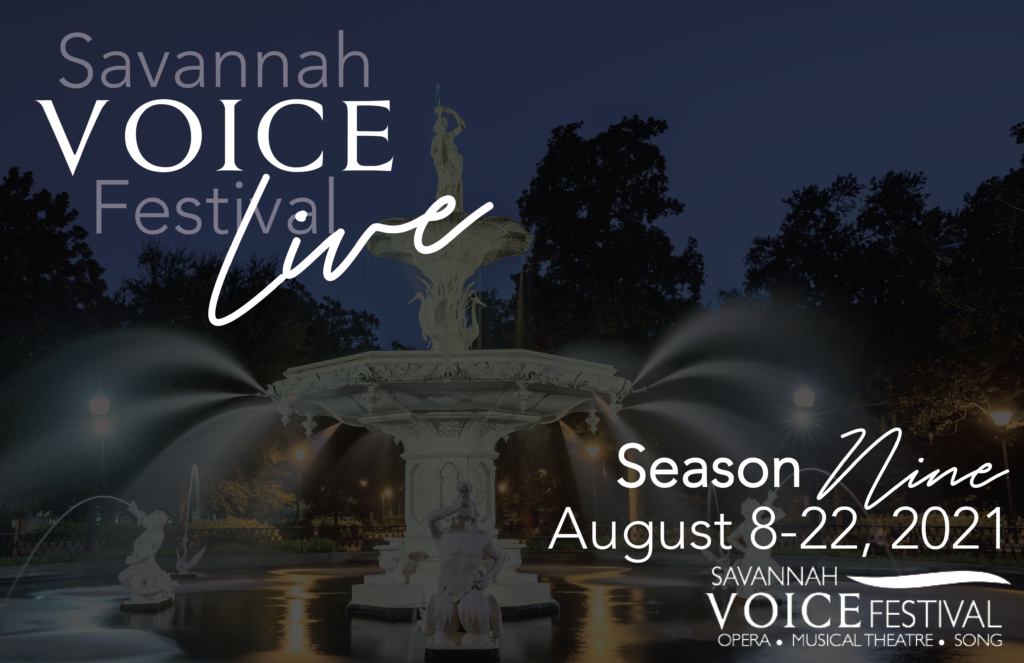 The events will begin at 7 p.m. EST and will last 50 minutes each during week to present season nine “LIVE-online”:

“We are so thrilled to be able to offer this streaming opportunity for our patrons that maybe couldn’t make the travel to our in-person festival this year,” said Executive Director, Maria Zouves. “We want everyone to have the chance to see the hard work and abundant talent of our SVF artists in this last festival season.”

SVF has also announced the dates and theme for its tenth season. SVF Season 10 will be slated to run Aug. 8-27, 2022 and the theme is “Season X: “GHOST””. Next year’s season will be featuring “Alice Ryley” and “Anna Hunter”, two operas written by SVF’s very own Michael Ching.

“SVF is grateful for Michael Ching and his hard work and dedication in creating two wonderful compositions to showcase to next year’s patrons,” said Zouves. “We believe that these two operas will showcase the history and mystery of Savannah and embody our tenth season of the Savannah VOICE Festival.”

“Alice Riley” debuted at the Charles H. Morris Center during Halloween weekend in 2015, a fitting time for the deliverance of a woeful ghost story peppered with murder, passion and history. This contemporary opera, performed and sung in the English Language, centers on the tragic story of Alice Ryley, an Irish indentured servant in the 1700s who, along with her lover, is accused of killing her master. “Anna Hunter, The Spirit of Savannah” debuted in Nov. of 2017 at the Davenport House with immersion performances that featured a live instrumental ensemble. This comedic ghost opera takes audiences on a journey through the Davenport House as they portray the story of the woman who changed the future of Savannah by preserving its past.

Savannah VOICE Festival is a 501(c) 3 tax exempt nonprofit arts organization in the state of Georgia. The Festival brings classical vocal excellence to the Savannah area through a two-week celebration of concerts, events and educational presentations during the month of August and throughout the year. Focusing on arts awareness and audience development in the performing arts, it offers music from opera, musical theatre and popular song. Donations are tax-deductible.