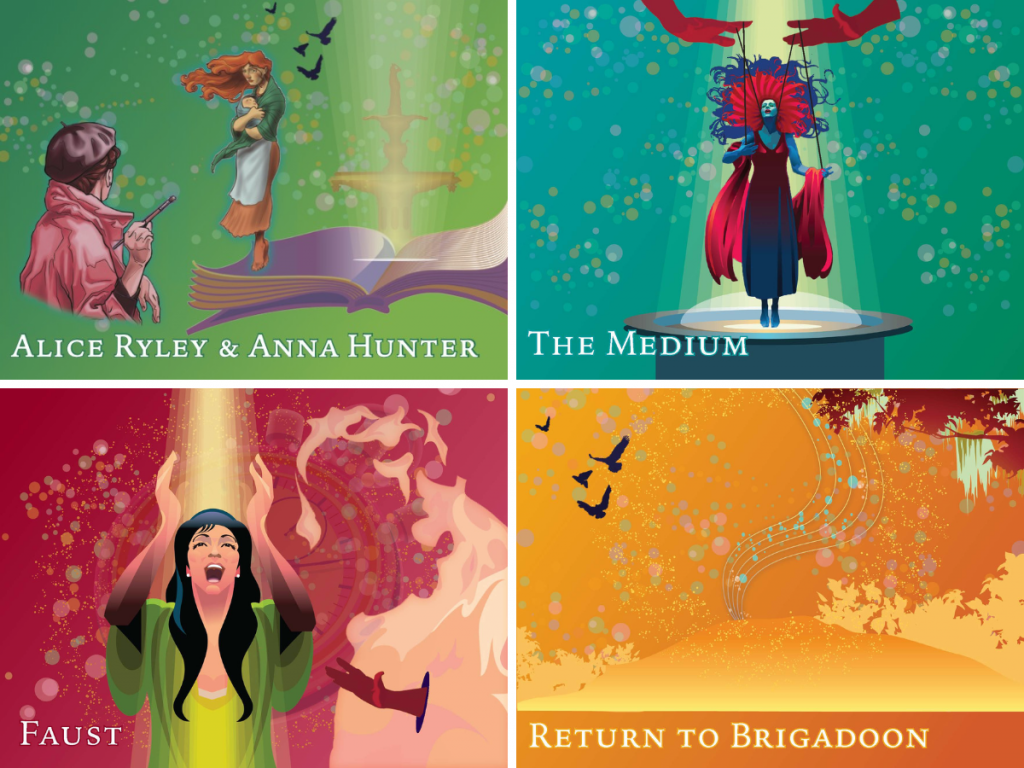 SAVANNAH, GA. – July 19, 2022 – The Savannah VOICE Festival (SVF) is swinging into its tenth anniversary season with five different operas produced by Savannah OPERA this August.  These out of this world productions range from a revue of Broadway’s Brigadoon to Goethe’s Faust, plus Menotti’s The Medium, and a special double bill of Alice Ryley, a Savannah Ghost Story alongside Anna Hunter, the Spirit of Savannah.  Jorge Parodi, Artistic Director of SVF comments; “One of the objectives of Savannah OPERA is to make opera accessible to all, with four of our 2022 productions performed in English and we provide English supertitles for Faust.  We hope people will enjoy the range of operatic productions offered this year.”

For two nights only, on Aug. 12-13, patrons can experience the back-to-back magic of Alice Ryley, a Savannah Ghost Story, and Anna Hunter, the Spirit of Savannah, both directed by Joe Winskye and conducted by Andrew Bisantz. These two Savannah-centric operas were written by Savannah OPERA’s Composer-in-Residence Michael Ching.  This is the first time they will be performed together in the city whose history inspired these ghostly operas.  The double bills start at 6:30 p.m. on both August 12 and 13 at the Charles H. Morris Center, 10 E. Broad St. in Savannah.

Alice Ryley, a Savannah Ghost Story, based on a true story, paints a tragic image of an immigrant’s life as she embarks on new experiences of love and loss in the newly formed Georgia colony in the 18th century. Watch Alice, played by Jessica Ann Best, navigate bearing a child and her prosecution in Savannah’s high-profile murder case.

Anna Hunter, the Spirit of Savannah, is an uplifting comedy depicting Hunter’s life, a newspaper reporter, painter and community leader, who worked to save Savannah’s historic squares and founded the Historic Savannah Foundation in the 1950s. Audiences will be enthralled by the spirit of Anna, played by Savannah VOICE Festival’s President and Co-Founder Maria Zouves, as she returns to haunt a present-day tour guide.

The Medium is a bone-chilling, one-act American opera. Executive Director Chad Sonka and conductor Andrew Bisantz team up to tell the tale of a medium falling victim to her own fraudulent voices. Enjoy this eerie story at 6 p.m. and 8 p.m. on August 11 at the scenic Telfair Academy, located on 121 Barnard Street in downtown Savannah.

Return to Brigadoon is a special musical revue of a timeless fairytale created by Lerner and Loewe that will bring back old memories and captivate new hearts. Audience members will be transported by the parallel world portrayed. This production will be held at 6:30 p.m. on August 16 and 18 at the charming Charles H. Morris Center.

Charles Gounod’s Faust is a haunting, grand opera, portraying a man’s pact with the devil in exchange for youth and love Goethe’s tale of Marguerite and Faust be brought to life by SVF’s Artistic Director, Jorge Parodi and prolific stage director, Fabrizio Melano at 6:30 p.m. August 19 and 21 at the beautiful Asbury Memorial Church