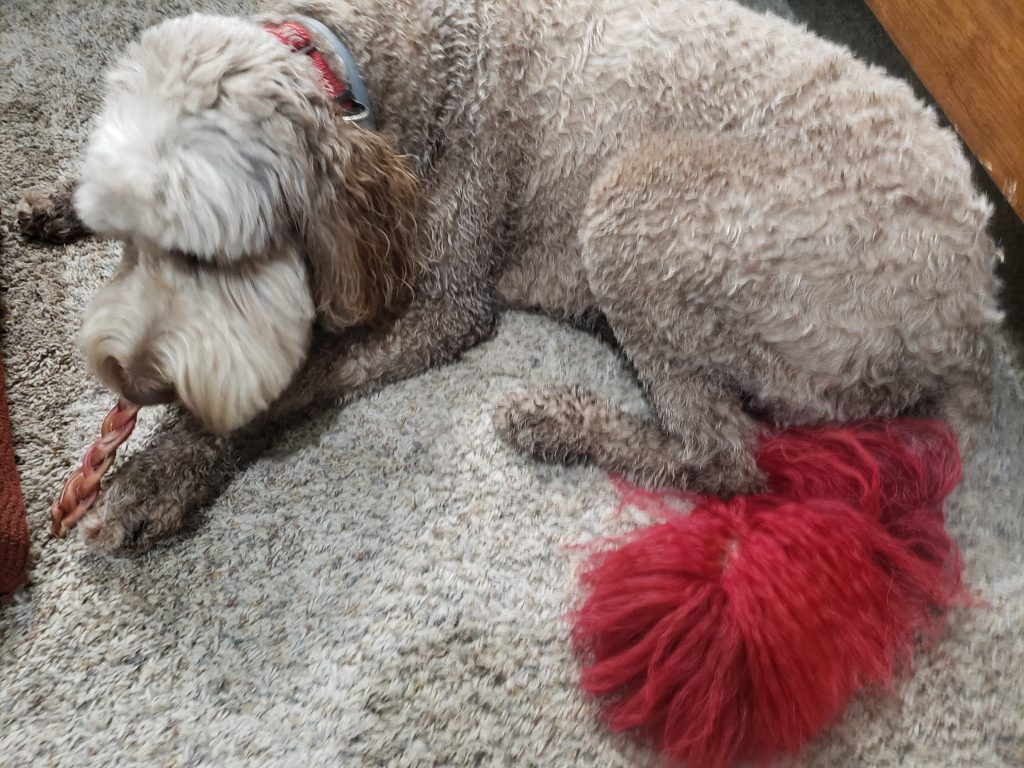 Even with the general election and the inauguration of a new President now behind us, the media – print, broadcast and social- is still full of politics, politics, and more politics.  Divisiveness across our society is still widespread so, in the spirit of national unity and light relief, this column targets a subject that I believe almost all of us can agree on.  I’d like to cover the energy, loyalty, and downright joyful ridiculousness of a dog breed that, according to the American Kennel Club (AKC), isn’t really a dog breed at all.  The Labradoodle.

Two years ago, I knew very little about this so-called “designer mutt” breed since my dog experience had all been with Collies and Retrievers, with one little West Highland Terrier also in the mix.  But all that changed when Coco entered our family and our small pack of two other dogs. My experience with this breed now runs deep and it has been quite the experience!

Labradoodles were originally developed as a standardized crossbreed between Labradors and Poodles back in 1989 when Australian dog breeder Wally Conron introduced the crossbreed to the Royal Guide Dog Association of Australia in Victoria.  The idea was to combine the intelligence and non-shedding nature of a Poodle with the gentle temperament and easy trainability of a Labrador, to create a great guide dog for those with allergies to dog hair and fur. Today, Labradoodles are sometimes used as guide and therapy dogs, but their popularity as family pets has really soared. The Labradoodle comes in three size variations, depending on the size of the Poodle used for the first-generation breeding. The three sizes are Standard, Medium, and Miniature.  Our Coco girl is a Standard Labradoodle weighing in at 53 pounds.  There are also Goldendoodles which are a cross between Golden Retrievers and Poodles.  In fact, the Poodle is often crossed with many other breeds so there are also Cockapoos, Maltipoos, Schnoodles and more.   Visit www.dogtime.com for more information.

There is a little controversy surrounding Labradoodles since the AKC still refuses to recognize them as an official breed, and some breeders believe that these and other hybrids are breeding long term problems into the population rather than out.  However, you can find lots of dog experts who disagree with this viewpoint.  One aspect we have come to realize is that because Labradoodles are a mix, it’s hard to know how much of each parent they inherit. This became evident when a neighbor spotted our naughty Coco racing down the road and described her as “that Poodle dog”.

A couple of years ago we had just come off an unfortunate experience with an overly aggressive rescue dog.  Therefore, we wanted and needed our next dog to have a consistently friendly temperament, intelligence, be good with other dogs, and be trustworthy around people, especially our young granddaughters.  We achieved all this and more with Coco.

We also got a dog full of playful mischief, who loves to dig up the yard, sometimes bark a little too much and runs away through our neighborhood for an hour at a time.  However, she does all this with such happiness and good humour that it is difficult to be too mad at her.

Coco was chocolate brown when we got her as a puppy, but no sooner had she learned her name, she completely changed colors into a shade of beige/grey.  I suspect we have the only grey dog in Georgia named Coco.  I tell people she is named after Coco The Clown (for obvious reasons) or Coco Chanel in that she has a certain understated elegance, even though my husband says it is so understated that it is non-existent.  She loves to swim but with the grace of a donkey, and slides across our hardwood floors, missing the corners at too high a speed just like cartoon dog Scooby Doo.  She makes me laugh.  Just to add to her unique style we have dyed her tail orange – so that she does not get mistaken for a deer by hunters in the woods when she escapes the confines of our yard.

Coco is extremely smart and playful, has big loving (almost human) brown eyes, and is completely devoted to our family.  When I arrive home from work tired, stressed or distracted, it is simply impossible to stay in a bad mood when our three dogs – Dexter the Westie, Georgie Girl the Flat-Coat Retriever and Coco greet me– toys in mouth.  It is the happiest moments of their lives every day and is a real highlight of mine too.

I say goodbye this week with a little excerpt from Canadian romance author Roxanne Snopek’s book Saving the Sheriff that, other than the color, reminds me of getting home most evenings these days – “Rory’s big labradoodle made a snap judgement that Frankie was everything her life had been missing up until now. She flung herself into the girl’s arms, wiggling and whining, a shaggy mass of chocolate-colored enthusiasm.”