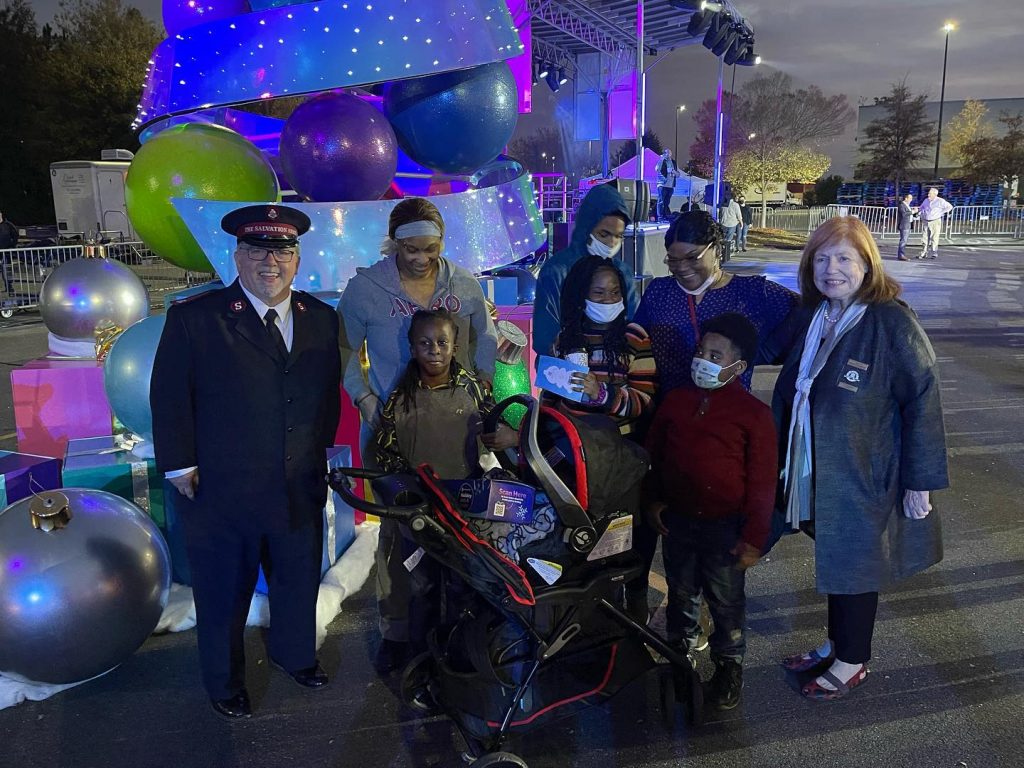 SAVANNAH, GA. – Dec. 9, 2021 – The Salvation Army of Savannah’s received $10,000 during Sam’s Club’s Merryville event in Pooler on December 4. These funds will help TSA be able to provide help to families in the Pathway of Hope program and give them the ability to move forward in their lives. Pathway of Hope participants, Ms. Thornton and Ms. Brown, were present during the event. The Salvation Army’s Pathway of Hope program was launched in 2011 to provide targeted services to families wanting to break the generational cycle of poverty and enable a path out of constant crisis. It is rooted in a case management approach, focusing on the client’s individual needs and mastery of different life skills.

The Merryville event was attended by members of the community as well as local dignitaries and leaders, including Pooler Mayor Rebecca Benton who was present during the event. This fun-filled Christmas celebration offered an ice rink, a Salvation Army angel tree, red kettles, virtual Santa booth, craft stations, and Member’s Mark food truck.

Ms. Brown and her son began their journey in The Salvation Army Savannah shelter. Ms. Brown was able to obtain a job and moved out of the shelter and began living with a friend. Since then, Ms. Brown has been an active participant in the Pathway of Hope initiative. Through this initiative she has been committed to working hard and saving money for a place of her own. Ms. Brown recently had a baby and is looking forward to providing a home for her two sons. Ms. Brown commented:

“The Salvation Army Pathway of Hope Mission has helped me.  It is the best program that I have come across they actually care about the people they help. My case workers Mrs. Cindy and Mrs. Dell are awesome beyond words. They have given me a new sense of direction. I have learned to manage my time and money better. The Salvation Army has given me a second chance when nobody else was willing or cared.  With the housing they provide, I was able to make it a home. Thank you for all you have done for me and will do in the future.”

Ms. Thornton turned to The Salvation Army when her husband passed away in 2019. After his passing, the Thorntons lost their house, job, and their car. By joining the Pathway of Hope initiative, Ms. Thornton and her children were given a safe place to call home. Recently, she was diagnosed with stage 4 Metastatic Colon Cancer that spread to other organs. During her battle, Ms. Thornton believes that the staff at The Salvation Army of Savannah became like her family and supported her through it all.

“My Pathway family, Mrs. Cindy especially, was right by my side through all my challenges these past few years, making house calls with boxes of food for me and my children. As of today, I am in remission with no sign of the disease. With the help of The Salvation Army of Savannah, my family is so blessed and grateful for such a selfless group of people who provide shelter, church, and childcare. The Salvation Army of Savannah helps rebuild and empower families like mine.”

For more information about TSA, please visit www.salvationarmygeorgia.org/savannah/ or call 912-200-3004.