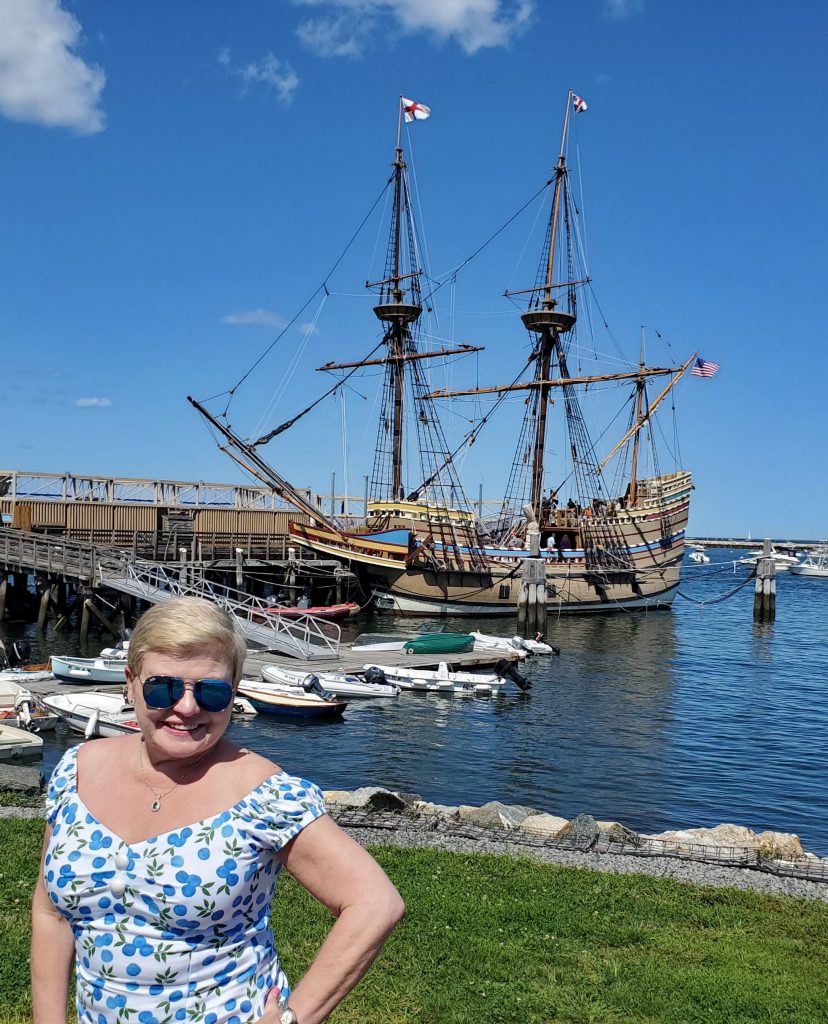 I adore history and actually majored in this subject at university.  I have long wanted to visit the Cape Cod peninsula in New England and explore the history of the area, especially where the Mayflower ship landed in Massachusetts 401 years ago.  The pilgrims named the area where they landed Plymouth, after the British town from which they had sailed 66 days earlier.  I found it thrilling to learn about my British ancestors who had preceded my own emigration to the USA by settling a new land four centuries ago, most of them were in search of religious freedom.

I was able to persuade my husband to visit New England in August mainly because he knew that the high temperatures would be in the seventies!  In addition to the historical aspect, I was keen to see Cape Cod and some of the natural beauty of the Eastern seaboard.  I have also enjoyed many novels by an author who lives on and sets her books on Nantucket so was determined to make the journey by ferry from Hyannis – just like in her books – and discover more.

Nantucket is an island about 14 miles long and 3.5 miles wide.  It is 30 miles off the coast of Cape Cod, to the south east of its bigger and more high-profile neighbor, the island of Martha’s Vineyard. My husband pointed out while we were on Nantucket that I was as close as I have been to the land of my birth since before the COVID-19 pandemic.  Nothing eastwards but the Atlantic Ocean until you hit Europe.

Nantucket was discovered by European settlers to America early in the seventeenth century, but was not settled until 1659 by the Quakers.  Its heyday was in the 19th century when ships based there were sent around the world to hunt whales for their oil and blubber.

Nantucket has a year-round population of approximately 12,000 but a summer population of around 50,000 – I think they were all getting off the ferry with us when we arrived!  There are three lighthouses on Nantucket, which were much needed as over 700 shipwrecks in the area caused the surrounding waters to be called “the graveyard of the Atlantic”

The gory business of whaling created a great deal of wealth for the island in the 18th century.  Whaling captains would leave their wives at home on Nantucket for years at a time to travel as far as the Pacific Ocean to hunt the mighty whale. Meanwhile their wives enjoyed the luxurious homes built with whaling money and ran their husband’s business affairs.  As someone whose modern-day husband used to travel a lot on business, I cannot imagine saying, “Be careful dear, see you in 5-7 years!”

Herman Melville’s famous novel of 1851, Moby Dick, was based on whaling ships whose home harbor was Nantucket, but the author didn’t actually visit the island until 1852!  After oil – the fossil fuel variety – was discovered in Pennsylvania in 1859, the demand for whale oil decreased dramatically and within a decade the Nantucket whaling industry was all but dead.  The population of the island quickly declined by nearly 70% and the expensive houses built by the whalers were mostly bought as summer homes by wealthy people in Boston and New York.  Tourism began during the later years of the 19th century and by the middle of the 20th century was booming

The Kennedy family, known as Cape Cod royalty in decades past, summered on the Cape and owned property on the mainland.  Although they sailed the Nantucket Sound, they did not spend any significant time on the island

Most of the buildings on Nantucket are a “weathered gray” color, mainly because of very strict building regulations and the wooden gray siding widely used which can stand up to the winter fogs, rain, sleet, storms, and freezing temperatures.  The cost of a modest 3 bedroom and 2 bathroom house on Nantucket ranges from $1.5 – $12 million, depending on location and condition of the property. According to the Massachusetts Department of Consumer Affairs, the cost of living on the island is 21% higher than in the rest of the state, although to us tourists it seemed even more.  There is more information at www.history.com

We enjoyed our time in Cape Cod, where we did some seal watching, toured the Mayflower II, a replica of the original, and I had my first lobster roll and some good fish and chips.  Not quite like back in England, but New England is a great place and there is a lot there to remind me of the land of my birth.

I say goodbye this week with a quote from Melville’s Moby Dick. “Nantucket in a nutshell: a pile of sand, a glacial afterthought, but also a corner of the world, connected and connecting the small with the vast, an insignificant nothing that is part of the main.”