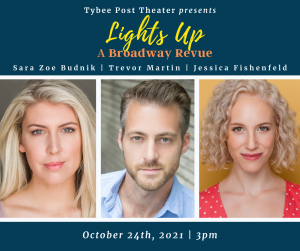 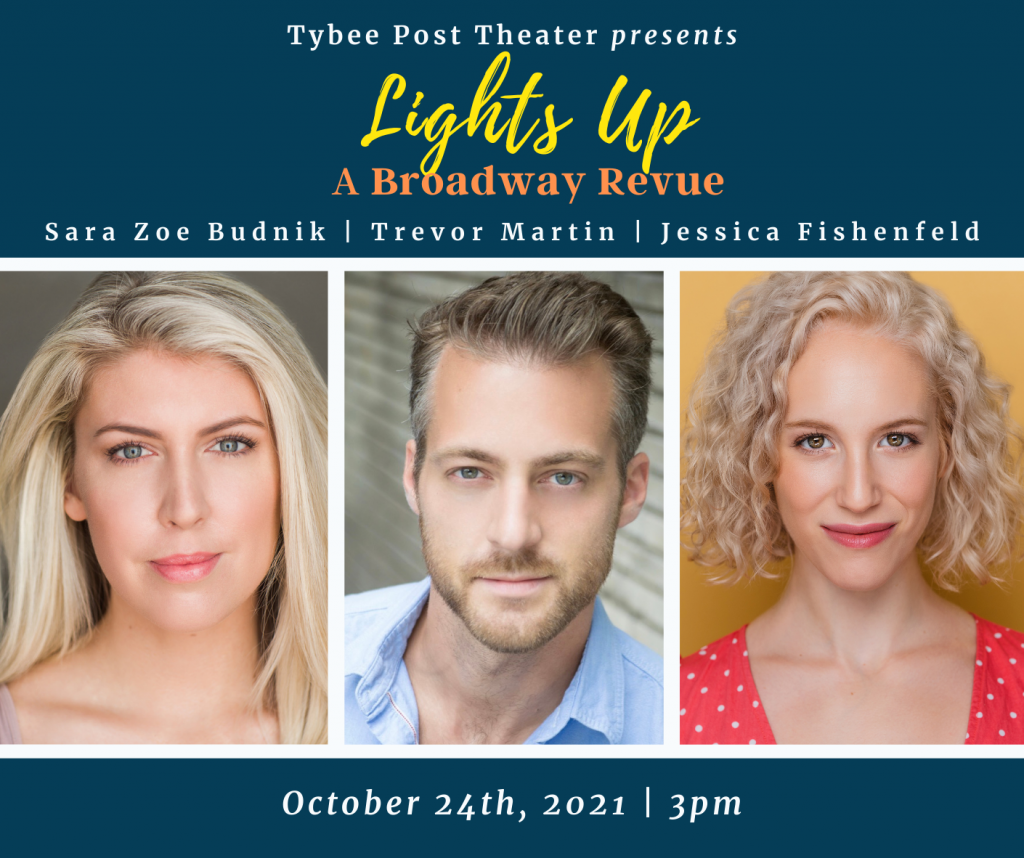 “Lights Up: A Broadway Revue” pulls together songs and tales from new and old Broadway shows, featuring songs from Rodgers & Hammerstein, Sondheim, Wicked, Frozen, Phantom of the Opera, and more! The vocalists featured in this performance are familiar faces to Savannah’s music scene, with all three individuals having competed in the Savannah-based American Traditions Vocal Competition (ATC). In addition, Fishenfeld and Budnik perform as Featured Artists with the Savannah VOICE Festival (SVF).

“Savannah is a great place for artists to call home and Sara, Trevor and I are grateful to the Tybee Post Theater for developing this show with us,” said Fishenfeld. “We are excited for the opportunity to create live music and look forward to welcoming our guests on Oct. 24 for this eloquently created program.”

The Tybee Theater, Inc., is a 501 (3) © non-profit corporation formed in 2001 and dedicated to restoring and operating the Tybee Post Theater as a performing arts and cultural center that is an integral part of the island community, enhances the cultural experience, encourages and attracts visitors, and improves the overall quality of life. To learn more about the Tybee Post Theatre, please visit www.tybeeposttheater.org.

Tickets to “Lights Up: A Broadway Revue” start at $25 each. For more information about the performance or to purchase tickets, please visit https://tybeeposttheater.showare.com/eventperformances.asp?evt=536.

Justin L. Addington is the Minister of Music at the historic First Baptist Church of Savannah, GA. Highlights of his twenty-plus year career as a church musician include the development of a nationally recognized concert series, performances of numerous major works with orchestra, the release of a professionally recorded organ CD, and choir tours to England, Italy, Austria, and Carnegie Hall. Justin received a Bachelor of Arts (cum laude) in Music Education/Vocal Performance from Limestone College in Gaffney, SC. While at Limestone, Justin won first place in the South Carolina NATS Competition for Musical Theatre, and in 2012 he was named the college’s Young Alumnus of the Year. Justin received a Masters of Church Music in Choral Conducting from Concordia University Wisconsin, and a Doctorate of Theology in Worship Studies from the Robert E. Webber Institute in Jacksonville, FL. Justin maintains an active schedule as a recitalist, accompanist, lecturer, clinician, composer, and consultant. In addition to his work as a church musician, Justin has also taught music in the public schools, served as a board member for several non-profit arts organizations, and worked as an actor and musical director/pianist for numerous semi-professional and community theater companies.

Sara Zoe Budnik is a vocalist from New York City who hops from genre to genre. Sara Zoe has performed in cabaret venues, regional theatres, toured nationally, and performed across the seas via world cruise. Broadway World described Sara Zoe’s Mezzo-Soprano vocals as “Moving” and “Soulful” and that her performance “exudes a warmth that is hard to describe.” As a proud member of the USO Show Troupe, Sara Zoe has the honor of saluting America’s military through music that ranges from big band to Americana to today’s top 40 hits. Sara Zoe is also one of Savannah’s newest residents! After being a semi-finalist in the American Traditions Competition in February of 2020, she fell in love with Savannah and moved here from NYC! She also performed at the Savannah VOICE Festival’s ninth season: LIVE! You can see more of Sara Zoe at hellosarazoe.com

Jessica Fishenfeld, soprano and actor “triumphed” (NY Observer) in her New York City Opera debut in the World Premiere of Stonewall, with “clean coloratura” (Opera News) and “spunky personality” (Opera Wire). She made her off-Broadway debut as Brünnhilde in Das Barbecü. Amid the mass pandemic closures of 2020, she produced and performed in Grateful: The Songs of John Bucchino, 20th Anniversary Virtual Concert, “one of the slickest, best-produced virtual concerts to come out of the last ten months” (Broadway World), among Broadway and Cabaret luminaries. She also appeared virtually with the New York Festival of Song, OmniArts Foundation, Center for Contemporary Opera, Teatro Grattacielo, Savannah VOICE Festival, etc. She recently starred in the world- and NY- Premieres at Circle in the Square and National Sawdust and won Semi-Finalist prizes in the 2021 American Traditions Competition and 2019 Lotte Lenya Competition. Other highlights include soloist appearances at Carnegie Hall, Birdland Jazz Club, and more. Visit jessicafishenfeld.com for more and keep in touch on IG @jecafish for the latest news!

The American Traditions Vocal Competition (ATC) celebrates and preserves all styles of classic American music. The organization promotes these songs by producing annual vocal competitions in Savannah, Georgia, that awards in cash prizes. The ATC is committed to serving the greater Savannah community. The organization provides musical education, exposure and performances for Savannah locals of all ages. This nonprofit arts institution was born of the desire to foster and preserve traditions of musical expression, which have been significant in the culture of the United States, by celebrating the repertoire that represents both the art and the popular cultures of our country.

Savannah VOICE Festival (SVF) is a nonprofit arts organization in the state of Georgia. The Festival brings classical vocal excellence to the Savannah area through a two-week celebration of concerts, events, and educational presentations during the month of August and throughout the year. Focusing on arts awareness and audience development in the performing arts, it offers music from opera, musical theatre, and popular song