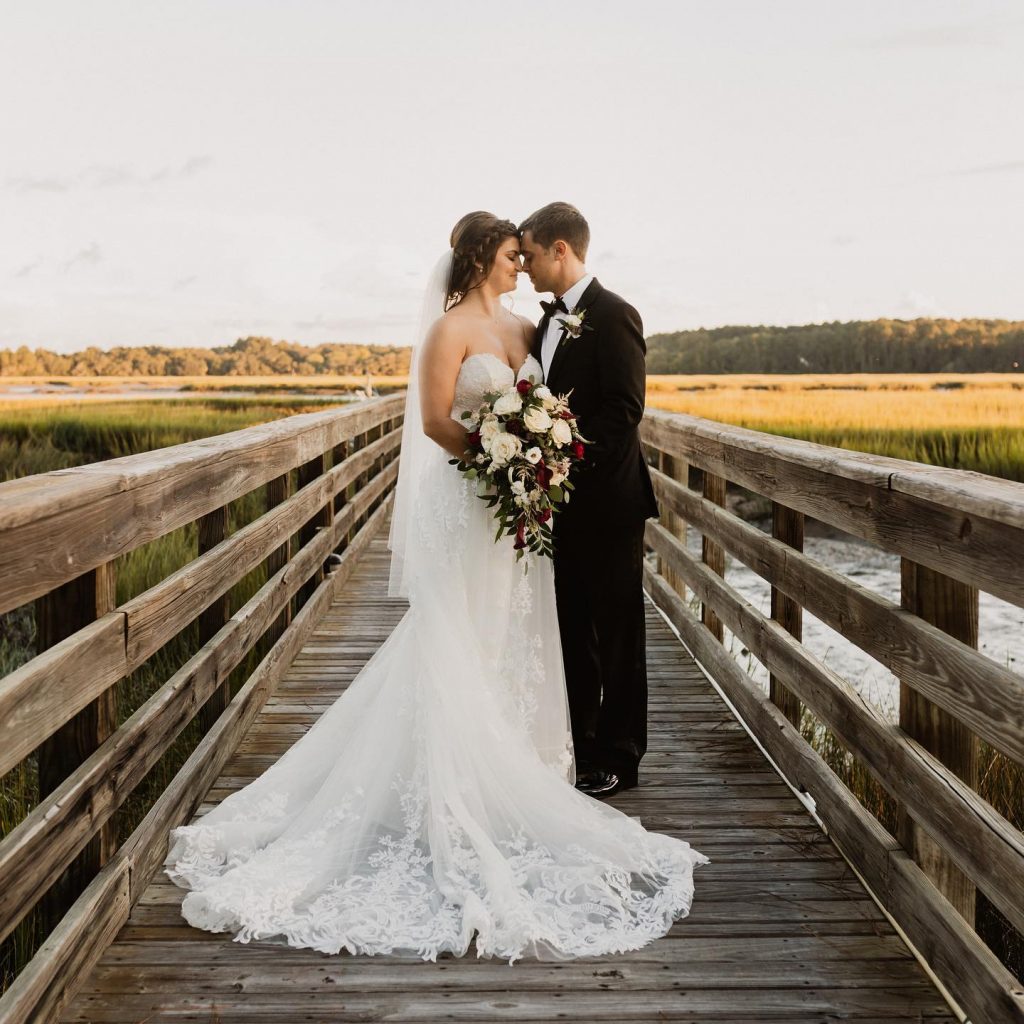 I have already enjoyed attending several great in-person events in October as the world slowly emerges from the COVID-19 pandemic.  I loved going to the Great Ogeechee Seafood Festival last weekend, being at the annual gala of The Historic Savannah Foundation, and attending a wonderful October wedding.

I am blessed to have a tight knit and supportive team of people working with me at my marketing agency.  We work hard, occasionally play hard, and often celebrate together.  My husband and I were delighted to be invited to the wedding of one of our team at LFPR.   She was a beautiful bride, it was a fantastic ceremony, and the whole event was perfect.  I love dressing up for big events, and weddings are the best!  This beautiful wedding set in the South Carolina Low Country on a sunny autumn afternoon did make me think about the differences and similarities between British and American weddings, and not just the weather!  Instead, I reflected on the traditions, the attire, and the history behind them.

Of course, I must start with THE dress.  In ancient Greece, brides not only wore white but often painted their bodies white too. A few centuries ago, in Europe, a bride would simply wear her best dress, usually in dark colors – but avoiding what they considered to be the unlucky shades of yellow or green.  Later, blue became the popular choice because it represented purity and piety with a connection to religion and the Virgin Mary. And though wedding gowns made in white can be traced to the early 1400s, it was not popularized until 1840 during the wedding of Queen Victoria, when she wore an elaborate white dress – symbolizing goodness and purity. Today, most brides in Western Christian culture wear white, ivory, eggshell or ecru.

In the UK, weddings are traditionally held earlier in the day than in the USA (noon is popular), usually followed with a seated luncheon, known strangely as a “wedding breakfast”.  This contrasts with the traditional late afternoon or early evening American wedding, which is often followed by a dinner party.  This means that the style of dressing for guests is often different.  At American weddings, women tend to wear glamorous evening gowns or cocktail dresses, and men generally wear smart suits or tuxedos. British guest wedding attire, on the other hand, is generally more formal (dare I say “stuffy”?) with men wearing “morning suits” of long grey jackets and waistcoats with striped, gray trousers (pants); women guests generally wear formal day dresses, often with long matching coats and hats.

Headgear is another big difference, and this is where the traditional British love of wearing hats and “fascinators” to weddings comes in.  Up until the middle of the 20th century, respectable British women would always wear a hat, and the tradition of elaborate hats for weddings remains popular today– especially among royalty and the upper classes.  Fascinators are tiny hats featuring feathers, lace, ribbons, or sequins.  Often these are less like hats and more like elaborate little concoctions clipped onto the hair. The history of fascinators began in the 17th century with women wearing scarves or veils wrapped around their head to add mystery to their appearance. 100 years later, women in royal European courts began adorning their hair with jewels, flowers and even small waxen figures. The trend developed throughout the 20th century and remains popular today – especially at royal weddings. For more information, visit www.history.com

Overall, wedding wear is big business on both sides of the Atlantic, and this is driven mostly by the wedding dress itself.  The global wedding wear market is around $60 billion, and market research organization Statista believes that wedding dresses alone will account for about $41 billion this year.  Most of the rest is ladies’ gowns. In contrast, the men’s black tuxedo market is believed to be less than $2 billion.

I will say goodbye with a quote from famous American wedding dress designer, Vera Wang. “I want people to see the dress but focus on the woman.”